Walking Away From Iran Deal Could Be Trump Card for Success in North Korea Talks, Experts Say 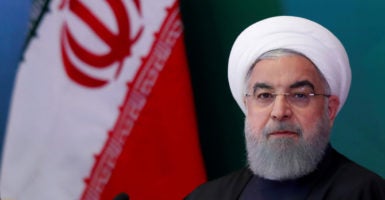 Iranian President Hassan Rouhani attends a Feb. 15 meeting with Muslim leaders and scholars in Hyderabad, India. The Trump administration is about to decide whether to keep in place a key part of the Iran nuclear deal. (Photo: Danish Siddiqui/Reuters/Newscom)

Walking away from the Iran nuclear deal as a major deadline for a decision looms next week could strengthen President Donald Trump’s hand in negotiating with North Korean dictator Kim Jong Un, foreign policy experts say.

Trump announced Friday “we have a time and a place” settled on for the talks with North Korea, but said he wasn’t ready to announce those details yet.

The Trump administration has said it would decide by May 12 whether to reimpose sanctions on the central bank of Iran. That would be a major undermining of the 2015 Obama administration-led multilateral nuclear deal, formally known as the Joint Comprehensive Plan of Action. [Update: Trump tweeted Monday that he will announce his decision Tuesday, May 8.]

Meanwhile, Trump’s meeting with Kim is expected to take place in either late May or early June.

“It’s quite clear, at least previously, the North Koreans had watched very closely the negotiations over the [Iran deal] and watched Iran reap tremendous benefits—economic, political, and strategic—as a result of those negotiations,” Ilan Berman, senior vice president of the American Foreign Policy Council, said at a forum held Thursday by The Heritage Foundation.

“Up until now, I think it’s fair to say the North Koreans were eager to assume they could do the same as a result of negotiation,” Berman said. “So, what we decide on Iran, and what we decide soon on Iran, is going to have tremendous implications for the course, the success, and the expectations that we see surrounding the nuclear negotiations that are likely to emerge in North Korea.”

On Monday, Israeli Prime Minister Benjamin Netanyahu said in a televised address that Iran was cheating on the terms of the nuclear deal and “brazenly lying” about its compliance with the 2015 agreement.

“There has been a lot of ink spilled on the linkages, or perceived linkages, between the Iran and North Korean issues, with some people saying walking away from the Iran deal would undermine U.S. leverage with North Korea,” James Phillips, senior research fellow with The Heritage Foundation, said. “Others say … that the ‘axis of evil’ is still alive and well, and there is strong reason to suspect these—I wouldn’t say close allies, but allies of convenience.”

President George W. Bush—before the 2003 invasion of Saddam Hussein’s Iraq—referred to Iraq, Iran, and North Korea as an “axis of evil.”

It’s silly to think backing away from the Iran deal would prompt Kim to question negotiations with Trump, said Richard Goldberg, senior adviser with the Foundation for Defense of Democracies.

“If you’re thinking about this at home, when it’s said on TV, you nod your head. ‘That makes sense. We break a deal with Iran, how can we come to a deal with North Korea?’” Goldberg said at the forum.

But he asked the audience to unpack that argument, by putting themselves in the place of the North Korean leader. He said:

You’re Kim Jong Un. You’re a dictator. You kill members of your family. You starve your people. … You commit some of the most horrific human rights abuses every day.

Do you think you are on the couch with your therapist, thinking about your relationship with Donald Trump? ‘I don’t know if I can really trust the guy. He broke that deal with Iran. I don’t feel like I like him right now.’ No, because the United States has a boot at your throat economically, politically, militarily.

And, it’s basically telling you, you can sit down with us and discuss the dates that you are going to verify and denuclearize. Or, we can continue this maximum pressure, but it’s not going away, and maybe your regime will at some point.

That’s actually what’s happening. The guy is a dictator. The sooner we align our expectations of Iran with what we’ve told North Korea our expectations are of that regime, the better and more successful the possibilities for an outcome with both.

The new intelligence suggesting Iran was not an honest negotiator on the nuclear deal could influence the tenor of the talks with North Korea.

The United States previously was not willing to allow North Korea to get away with cheating on nuclear agreements, such as breaking the 1994 Agreed Framework, in which North Korea agreed to a deal with the Clinton administration not to pursue a nuclear program.

“There is a strong pattern where the United States—despite the best efforts of some diplomats and despite the best efforts of lobbyists—consistently seeks to calibrate our national security strategy to reality, rather than simply put lipstick on a pig, whether that pig is the Islamic Republic [of Iran] or whether it’s North Korea. It doesn’t matter,” said Michael Rubin, resident scholar with the American Enterprise Institute.

This report was updated to note Trump’s promised announcement May 8 on Iran.