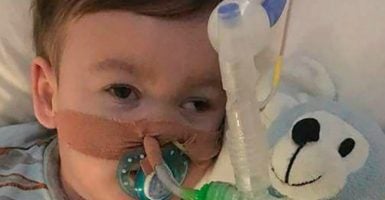 Alfie Evans died April 28, after the British government would not allow his parents to take him to Italy for further medical care. (Photo: Ropi/ZUMA Press/Newscom)

In commenting on this tragic case, this writer cited the plight of Alfie’s parents—Tom Evans and Kate James—waging a desperate battle with hospital officials in the British courts to secure alternative care outside of the system. I noted, in this context, that “[i]f you give government control over your health care, you give them control over your life.”

In response to my commentary on the decisions of British hospital and government officials, columnist Froma Harrop says that I “tried to swing the discussion back to the imagined evils of government-run health care.”

“But,” Harrop emphasized, “the medical judgments in Alfie’s case were made by medical professionals. Doctors at the Alder Hey Children’s Hospital had scans showing ‘catastrophic degradation of ([Alfie’s] brain tissue.’ They determined that leaving the baby tied to wires and tubes with no hope of improvement would have been ‘unkind and inhumane.’”

Harrop’s observation is beside the point I made in my commentary. When this story broke, I acknowledged on national television that the British doctors in question may have been “absolutely correct” that Alfie’s condition was terminal. But I emphasized that the parents have, or should have, the primary right to make the ultimate decisions about their child’s care—including the right to seek second medical opinions and alternative therapy.

The tragic case of Alfie was not about the medical judgments of the British physicians (though they were unable to provide the parents with a specific diagnosis) or the child’s potential health outcomes.

Reconsider the basic facts. They are clear and viscerally repellent. The British government and its employees (the hospital officials at Alder Hey Hospital), backed by the British judiciary, denied Alfie’s parents’ request to seek alternative medical care at other hospitals.

They denied their request to provide their child with oxygen at their own personal expense.

They denied the parents’ wish to take their child to Italy, which granted the child Italian citizenship, to secure alternative treatment at no expense to the British government.

Finally, the parents were not even allowed to take their dying child home.

None of these official acts are “imagined evils.”

The Supreme Court of the United Kingdom, in its disposition of the case, declared that hospital officials had the final word on Alfie’s fate. Government doctors, in a government hospital, backed up by the government’s courts, denied the parents’ wishes and disregarded their views about what care would be best for their child.

This is a systemic failure, not the particular failure of any individual official or medical professional.

Commenting on the tragedy, Joseph Morris, a former assistant attorney general of the United States, summarized the British legal position:

The proposition the court sustains is that strangers—physicians; a hospital; a taxpayer-funded health benefits payment system—have final authority, superior to that of a child’s parents, to decide on the child’s course of care. This judgment shocks the conscience. The court does not explain why it must be so. It simply repeats, as if chanting the text of a talisman, that ‘best interest’ is the ‘Gold Standard.’ The court assumes, without explaining why, that doctors and bureaucrats, rather than parents and families, are better judges of “best interest.”

It is no surprise that the tragic Alfie Evans case, exposing such raw government control over the child’s health care, has sparked international outrage.

It is also heartening that certain British politicians are mobilizing for change.

The cases of Charlie Gard, Aysha King, and now Alfie Evans, show a dangerous trend of public bodies depriving parents and families of the right to make decisions they believe are in the best interests of their children. Parents’ rights should neither be ignored nor dismissed as irrelevant by hospitals and courts, who believe they know best and have the power, money, and resources to overwhelm families who simply want to save their child.

For Americans, this British case is a teachable moment. Government control of health care is government power over health care. Americans should never be hoodwinked into a scheme that cuts off their alternatives for care or coverage or reduces them to supplicants fighting for a bureaucratic permission slip.