Bernie Sanders Says the System Is ‘Rigged.’ Here’s What Adam Smith Would Say. 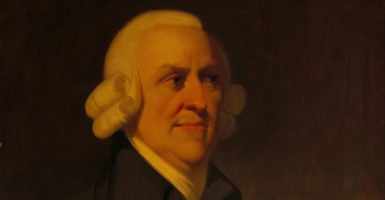 Lauren Brubaker, PhD, has taught at the University of Notre Dame, the U.S. Air Force Academy, and St. John’s College in Santa Fe, New Mexico, from which he retired.

The liberal reward of labor, therefore, as it is the necessary effect, so it is the natural symptom of increasing national wealth.

The scanty maintenance of the laboring poor, on the other hand, is the natural symptom that things are at a stand, and their starving condition that they are going fast backwards.

Sustained economic growth is the cause of rising wages, while no or declining growth is a sure sign that conditions will be bad and getting worse.

Comparing our current situation to conditions when Smith wrote, we have to admit that these benefits have been substantially realized by the system we now call free markets or capitalism.

Yet, despite the almost unbelievable acceleration of wealth and liberty in the countries that have adopted Smith’s system, few would claim that this progress has been simple or uncontroversial—or that the benefits have accrued equally to all.

Noted libertarian billionaire industrialist Charles Koch, writing in an opinion essay for the Washington Post, argued that he agreed with one claim made by socialist Sen. Bernie Sanders, I-Vt.—namely, that the system is rigged in favor of the few.

Is there something inherent in the system of natural liberty, or in human nature itself, that is systematically corrupting in ways that undermine its claims of universal benefits? Is Smith overly optimistic or naive in his defense of the benefits of free markets?

In a recent published paper in The Heritage Foundation series on First Principles, I discuss Smith’s analysis of the dangers to free markets and his proposed solutions: “Is the System Rigged? Adam Smith on Crony Capitalism, Its Causes—and Cures.”

For Smith, the dangers that natural liberty faces are not a result of the system of free markets itself, but of mankind’s flawed human nature, particularly the desire of those he called “merchants and manufacturers” (among others) to “rig the system.”

The natural desire to “better our condition” motivates us to strive for a better life. This is the motivation that underlies the success of natural liberty. Yet this same natural desire also leads to cronyism and corruption when businesses and others use the power of government to procure for themselves “systems either of preference or of restraint.”

In so doing, Smith said, they impose an “absurd tax on the rest of their fellow citizens,” retard growth, and increase inequality.

As a result, free markets are neither self-establishing, nor self-sustaining. If we are to continue to reap the very real benefits of natural liberty, we must be prepared to defend against cronyism.

Smith showed that many groups and businesses have incentives to try to evade the discipline of the market by using government rules, tariffs, licensing, subsidies, and other forms of government intervention to give themselves special privileges not available to their competitors, to restrain new entrants, or to prevent competition entirely.

Further, governments at all levels have a built-in bias in favor of expanding their power and perks, are constantly subjected to undue influence or outright corruption by special interests, and often use their powers for private gain.

That’s not to say that the people involved in commerce (or in government) are uniquely corrupt. It’s sufficient that they are simply normal human beings with the normal mixture of motives.

By contrast, if the free market prevails—rather than government intervention—the opportunities for cronyism are largely eliminated, and success depends on offering a better product or service.

Smith further argued that every such intervention by government distorts the market and retards—sometimes severely—the possibility for economic growth.

If it is not possible to change human nature, our hope lies in informed and vigilant opposition to cronyism.

Smith saw the dangers and intended his writings to give intellectual grounding for the constant political effort to stymie those private interests and to defend natural liberty—to “enrich both the people and the sovereign.”

To the extent that we have benefited from the great enrichment brought about by the adoption of natural liberty, we—especially, the less-privileged members of society—should give thanks to, and learn from, this great benefactor of mankind.

How great and how widespread those benefits continue to be depend on our understanding of cronyism and its prejudices and on our persistence in opposing it.