DACA Should Be Overturned. A New Lawsuit Might Succeed in Doing That. 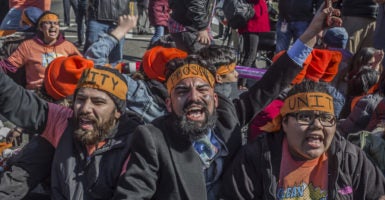 Hundreds of "Dreamers" and their allies march through the streets of Washington, D.C., protesting Congress' failing to come up with a legislative fix for DACA, March 5, 2018. (Photo: Michael Nigro/ZUMA Press/Newscom)

A lawsuit filed Tuesday by Texas and six other states may finally result in the long-overdue termination of the Deferred Action for Childhood Arrivals program, which was created without legal authority by President Barack Obama in 2012 to allow children brought into the U.S. illegally to temporarily remain here under certain conditions.

The lawsuit does not address the question of whether allowing the roughly 700,000 illegal immigrants protected from deportation under DACA is a good policy or a bad one. Instead, the suit contends correctly that Obama exceeded his authority under law and under the Constitution to create DACA without the approval of Congress and without taking other required steps.

Whatever the outcome of the suit, the ruling seems certain to be appealed and wind up in the U.S. Supreme Court.

President Donald Trump announced in September that he wanted to phase out the program beginning in March, but federal judges blocked him from doing so after lawsuits were filed to keep DACA in place.

The lawsuit filed Tuesday against the U.S. Department of Homeland Security in the U.S. District Court in Brownsville, Texas, correctly says DACA must be invalidated because Obama had no legal right to create the program “without congressional authorization.”

The states contend that if Congress wants to, it has the authority under the Constitution to create whatever program it wants for the illegal immigrants affected by DACA. But the president doesn’t have that power acting alone.

This is a critical point. Under the Constitution, the president can’t change laws strictly on his own authority just because he thinks such a change is a good idea that will benefit the nation. Congress is a co-equal branch of government and must approve new laws.

If this were not the case, we could have one-person rule by the president—destroying the checks and balances between branches of government that are a key part of the separation of powers in the Constitution and that safeguard our freedom.

The state of Texas was joined by Alabama, Arkansas, Louisiana, Nebraska, South Carolina, and West Virginia in filing the lawsuit Tuesday.

In addition to lacking congressional authorization, the seven states say DACA should be thrown out because it:

DACA essentially gives a free pass to illegal immigrants who arrived in the U.S. before turning 16 by June 2007, granting them “lawful presence” with access to a myriad of government benefits, including work authorizations and Social Security benefits.

The lawsuit filed by seven states claims that DACA is just as “contrary to federal law” as the 2014 Deferred Action for Parents of Americans and Lawful Permanent Residents (DAPA) program, also created by Obama.

The 5th U.S. Circuit Court of Appeals halted DAPA in 2015. That decision was affirmed by a divided Supreme Court when it had just eight justices, following the death of Justice Antonin Scalia.

But as the 5th Circuit noted when it stopped the implementation of DAPA, letting a president exercise such power “would allow [the president] to grant lawful presence and work authorization to any illegal alien in the United States—an untenable position in light of the intricate system of immigration classifications and employment eligibility” under federal law.

Texas and the other states involved in the successful lawsuit against DAPA had threatened to amend their lawsuit and add a claim against DACA. But when the Trump administration rescinded DACA—announcing it would not issue or renew DACA permits starting March 5 this year—the states dismissed their DACA lawsuit.

The seven states revived their lawsuit Tuesday to counter the errant injunctions blocking Trump from ending DACA that were issued by U.S. district courts in California, New York, and Washington, D.C.

A federal judge in the nation’s capital recently issued another decision that the seven states argue “took the remarkable additional step of vacating the executive’s decision to wind down DACA, granting summary judgment that the wind-down was substantively unlawful … and ordering the Executive to continue issuing new DACA applications as well,” although that judge stayed his order for 90 days.

In addition to all of the legal claims against DACA, the seven states point out that the Obama administration’s overall refusal to enforce immigration laws “caused a humanitarian crisis.”

The states cite a 2013 federal court decision that said the Obama administration “encouraged international child smuggling across the Texas-Mexico border” because even though the federal government arrested human smugglers, “it completed the criminal conspiracy … by delivering the minors to the custody” of their parents who were in the country illegally.

By promoting human trafficking, the Obama administration helped “fund the illegal drug cartels which are a very real danger for both citizens of this country and Mexico,” the lawsuit filed Tuesday says.

The states want the U.S. District Court to declare the original 2012 DACA program invalid. They also plan to file a motion asking the federal court to issue a preliminary injunction stopping the federal government from issuing or renewing any DACA permits in the future.

The seven states assert that their “lawsuit is emphatically about the rule of law.” The “policy merits of immigration laws are debated in and decided by Congress,” not the executive branch, which “does not exercise a lawmaking role.”

Here’s the bottom line: Obama had no constitutional or statutory authority to create DACA and provide what amounted to an administrative amnesty program for illegal immigrants.

It is bizarre for judges in California, New York, and elsewhere to hold that a president cannot reverse the executive actions of a prior president—particularly when they were improper to start with. It is time the courts recognized that.