We Asked 16 Senators Advocating More Government-Run Health Care About Alfie Evans. None of Them Responded. 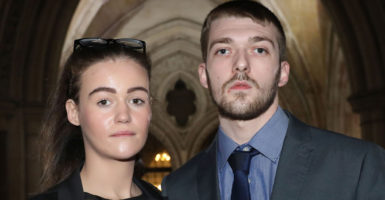 Sixteen liberal lawmakers who support a “Medicare for all” plan declined to respond to The Daily Signal on how they anticipate cases such as that of British toddler Alfie Evans should be handled in the United States.

Alfie died Saturday morning at Alder Hey Hospital in Liverpool, England, five days after the hospital followed government guidelines and took him off life support against the will of his parents.

The Daily Signal requested comment from Sen. Bernie Sanders, I-Vt., and 15 cosponsors of his legislation before the Senate Finance Committee that would make the Medicare program available to all Americans and increase the government’s influence in health care decisions.

Sanders, a self-described democratic socialist who sought the Democratic nomination for president in 2016, caucuses with the Democrats. His 15 co-sponsors are all Democrats.

In emails sent to the 16 senators Monday and Tuesday, The Daily Signal noted that they have advocated government-run health care and asked what they thought of the Alfie Evans case and how a similar case should be handled in the United States.

None had responded as of publication deadline Tuesday evening.

“In the British system, the government arrogated to itself the final say over the child’s fate, not his loving  parents, and in the process coldly repudiating the charitable provision of potential medical alternatives,” Moffit said in a written statement, adding:

The British courts, of course, sided with the British government and its National Health Service personnel. Americans must be on guard to make sure that government officials are never given such arbitrary power, power over life and death, denying the right of patients to go outside of the system and secure alternative sources of care or better medical treatment.

Alfie, who was almost 2, had a degenerative neurological condition that doctors had not conclusively diagnosed, The Sun reported.

His doctors acted under the guidelines of the National Health Service, England’s government-sponsored universal health care system. According to The Sun, the courts deemed that Alfie “could not be saved” and that it would be “unkind” and “futile” to pursue treatment.

Alder Hey Children’s Hospital ended Alfie’s treatment and removed him from a ventilator.

His parents, Kate James and Thomas Evans, had taken their legal fight to keep him on life support to the British Court of Appeal, the British Supreme Court, and the European Court of Human Rights.

On April 20, Britain’s High Court denied Alfie’s parents’ final appeal that they be allowed to continue to care for Alfie, ordering the hospital to remove his life support on April 23.