Small Business Confidence Way Up in the Trump Era 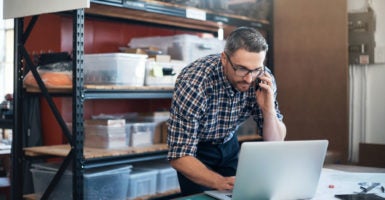 Highlighting the vital contribution of small businesses to the U.S. economy, President Donald Trump proclaimed that “small business owners embody the American pioneering spirit and remind us that determination can turn aspiration into achievement.”

Indeed, small businesses are critical assets to the economy. Defined as firms employing fewer than 500 employees, they play a huge role in America’s $20 trillion economy.

There are nearly 30 million small businesses in the United States, employing about half of the private workforce, according to the Small Business Administration.

Small businesses are also a proven source for job creation. Historically, they have generated two out of every three net new jobs created in America

My administration worked with the Congress to enact a tax-relief plan that provides small businesses with hundreds of billions in additional tax cuts.

As we usher in a new era of American prosperity, my administration will continue to implement a pro-growth agenda based on policies that champion small business creation and growth, giving more Americans the opportunity to start, scale, and succeed in businesses of their own.

As documented in The Heritage Foundation’s annual Index of Economic Freedom, economic freedom is the vital link between opportunity and prosperity. The overarching objective of economic policies should be to create an environment that provides the best chance of translating opportunity into prosperity, enhancing economic dynamism.

The index’s findings over the past two decades have shown that such economic dynamism can be sustained when governments adopt economic policies that empower individuals and firms with more choices, thereby encouraging greater business creation and growth.

Yet, the administration’s trade policies have generated a considerable degree of uncertainty. Maintaining the freedom to trade—both exporting and importing—is particularly important for small businesses, which generate more than 97 percent of all trade activity.

At a recent Heritage Foundation event that unveiled the 2018 Index of Economic Freedom, Secretary of Commerce Wilbur Ross acknowledged the importance of enhancing America’s economic freedom.

By better aligning trade policy with its tax and regulatory reform agendas that brush off government intervention, the Trump administration can advance the economic freedom that is critical to further nurturing America’s small businesses.