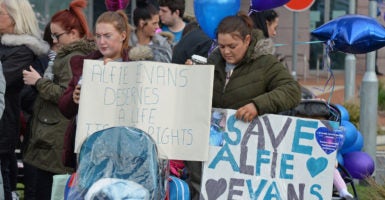 A parent would go to the ends of the earth for their child. But what if the government forcibly stopped them?

What if, instead, the government doggedly pursued their child’s death?

Such has been the tragic story of Thomas Evans and Kate James, and their son, Alfie Evans. It’s a chilling reminder of what happens when the government attempts to be doctor and to play God.

British toddler Alfie was hospitalized at age 1 after suffering seizures. Doctors suspected a degenerative neurological condition, but Alfie was never diagnosed. The toddler was in a semi-vegetative state and needed ventilation in order to breathe.

Soon, hospital staff at Alder Hey Children’s Hospital began to disagree with Alfie’s parents over his treatment. So, Alder Hey appealed to the High Court to remove Evans and James’ parental rights and remove Alfie’s ventilation.

This marked the beginning of a long and dramatic legal battle, as Evans and James made appeals not only to British courts, but the European Court of Human Rights. If Alder Hey would not continue Alfie’s life support, Evans and James argued, they should at least be allowed to take their son to Italy, where the Vatican hospital had already agreed to give Alfie treatment.

United Kingdom judges not only signed off on the decision to remove Alfie’s ventilator, but they repeatedly refused to allow the family to leave and pursue care abroad.

Alfie’s father tried everything. He flew to meet with Pope Francis and begged him to intervene. He wrote to the archbishop of Liverpool, beseeching him to show mercy and help them gain permission to take Alfie to the pope’s hospital.

“We don’t want to force ourselves upon him [the pope], and we don’t want therapeutic obstinacy, but we would at least like his disease to be diagnosed, and we would like him to receive the best possible treatment,” Evans wrote the archbishop.

In response to a father’s pleas, Italy granted Alfie citizenship and even offered to provide his travel in hopes that he might be able to leave the United Kingdom. But that was to no avail.

After Alfie’s ventilator was removed on April 23, the boy continued breathing overnight, motivating Evans and James to launch another last-ditch appeal to an emergency High Court to take Alfie to Italy. The court rejected their appeal. It is unclear what will come next for the family.

This shocking instance of government overreach into the realm of parental rights and the personal relationship between doctors and patients sets a troubling precedent for government control over who lives and who dies.

Even if the physicians at Alder Hey were right about Alfie’s poor prospects for recovery, the court is neither authorized to make, nor capable of making, intimate health care decisions for patients—particularly when those decisions have life-or-death consequences.

Nor does the state have a right to replace parents as the ones ultimately responsible for their children’s care.

What are the implications of trampling upon patient and parental rights in such a brazen fashion?

If the state gets to decide which lives are worth living, the government will begin to treat the most vulnerable as burdens to society—burdens who are ultimately disposable.

Evans indicated this in his letter to the archbishop of Liverpool:

[Alfie’s case] might set a further precedent like in Charlie Gard’s case in order to prevent parents from taking care of their sick children, considered a burden by the state because they are ill and ‘therefore’ useless, unproductive, and expensive.

Readers will recall when another British infant, Charlie Gard, was denied care by a U.K. judge, who in 2017 deemed his life not worth living.

Evans’ instinct is correct: When the government gets to be the arbiter of life and death, those who are sick, aged, or disabled are liable to be done away with as unnecessary expenditures.

This trend should horrify everyone, not just parents.

We are all vulnerable under such a government. Under what circumstances might the state determine that we ourselves are not fit to live? Could the government prevent us or our family from pursuing a second opinion or different treatment? Order our health care providers to remove life support? Perhaps even order them to induce death?

The government does not get to play doctor or to play God. Courts are not competent to make personal health care decisions, nor to replace parents in their responsibility to care for their children.

Such blatant abuse of power must be vehemently opposed and fought at every turn.

That is why Alfie’s army will keep fighting until no family has to go through what Evans, James, and Alfie have endured.

Alfie’s story is not yet over.