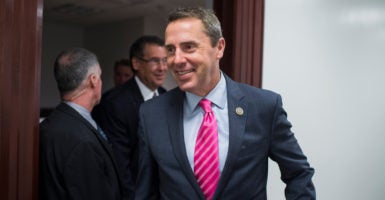 “Our job ... is to put together some kind of blueprint" for government spending, says Rep. Mark Walker, R-N.C., chairman of the Republican Study Committee. (Photo: Tom Williams/CQ Roll Call/Newscom)

House conservatives propose to cut nondefense spending and balance the federal budget within eight years in a blueprint released Wednesday.

The document produced by the Republican Study Committee, the largest caucus of GOP lawmakers in the House, includes a long list of policy goals such as repealing Obamacare, restoring power to states, making tax cuts “permanent,” reforming welfare programs, and “saving” Social Security and Medicare.

The 169-page blueprint, called “A Framework for Unified Conservatism,” proposes to cut government spending by more than $12.4 trillion over the next 10 years, compared with current law.

“I am very hopeful, when it comes to the legitimacy of this, if we are ever going to talk about the expectation of the federal government to live within its means, here’s the framework, this is the blueprint,” Rep. Mark Walker, R-N.C., chairman of the 150-member caucus, said Tuesday during a press briefing.

“I don’t believe for one second that everything can be immediately instituted,” Walker told reporters, but “our job … is to put together some kind of blueprint, the framework that I have discussed, where we show, ‘Here is the path.’”

The Republican Study Committee traditionally seeks to unify GOP lawmakers to promote a conservative agenda, and this proposal boasts that it “refocuses federal spending on core constitutional responsibilities like national security.”

The framework would reduce nondefense discretionary spending from the current $579 billion to $355 billion in fiscal 2019.

It also would reverse the decision by Congress to break caps on spending, which President Donald Trump approved Feb. 9 and again last month in signing the $1.3 trillion omnibus spending bill for the remainder of fiscal 2018.

The RSC plan also calls for:

The blueprint also calls for saving taxpayers’ money by converting some mandatory government programs to discretionary programs. With “discretionary” programs, Congress must set funding levels each year, while the funding of mandatory programs such as Social Security and other entitlements is determined by the number of those enrolled.

The RSC plan says it considered input from congressional committees, individual lawmakers and their staff, conservative think tanks, and the executive branch to put forward over 300 specific policy reforms and spending cuts.

Rep. Tom McClintock, R-Calif., chairman of the group’s budget and spending task force, told reporters Tuesday that this is the right way forward:

We block-grant many programs back to the states, giving them the freedom to innovate according to their own best judgment and needs; we fully fund the president’s defense requests while eliminating several wasteful programs and moving them to core defense priorities; [and] we save Medicare from impending insolvency in 2029 by moving to a premium support plan, very similar to the existing Medicare Advantage program.

McClintock is a senior member of the House Budget Committee as well as the Natural Resources Committee.

Besides calling for the repeal and replacement of Obamacare, the RSC blueprint proposes to make the health care market more affordable and competitive by allowing Americans to purchase health insurance across state lines, and by budgeting block grants for Medicaid at pre-Obamacare levels and limiting eligibility to U.S. citizens.

The budget blueprint says it “aims to go well beyond the least common denominator of politics to reflect the American people’s desire to see a more responsible and accountable government.”

It says it would do so in part by building on recent reforms such as making permanent the tax relief for individuals and other elements of the Tax Cuts and Jobs Act that took effect Jan. 1 after Trump signed the package that passed Congress without a single Democrat vote.

And it calls for:

That document includes the president’s recommendations to Congress, but Stan Collender, a former staffer for the House and Senate budget committees, is among those arguing that a rational budget process no longer exists. In an op-ed Tuesday in Forbes, Collender writes:

The federal budget process is not broken: It’s dead. Under Trump administration and congressional Republican control, the budget rules that are supposed to guide what the president and Congress do about the budget each year have died an ignominious death because of a combination of abject abuse and atrocious neglect.

In the congressional tradition known as regular order, the House Appropriations Committee passes 12 spending bills covering different aspects of government from transportation and social services to foreign policy and defense. Then the full House does the same, and the Senate follows suit. Finally, the president signs the 12 appropriations bills into law.

Congress hasn’t followed this process for more than 20 years, however.

In the latest go-round, Congress passed the $1.3 trillion omnibus bill to fund the government through Sept. 30, the end of fiscal 2018. By that time, Congress will need to approve a budget for fiscal 2019, or at least short-term funding, to avert a government shutdown.

With such problems for Congress in mind, the Republican Study Committee proposes “reclaiming the … power of the purse by limiting spending and reforming the budget process.”

The next move on a budget for fiscal 2019 and beyond essentially is that of the House Republican leadership team under Speaker Paul Ryan, R-Wis., who recently announced he will not seek re-election in November and will retire in January.

All 435 seats in the House are up in the November elections; Republicans currently hold 236 seats and Democrats 193, with six vacancies.

Justin Bogie, a senior policy analyst in fiscal affairs at The Heritage Foundation, said that if the RSC’s budget plan were to clear Congress, Americans “would see a smaller federal government certainly, less regulation, basically less of the federal government getting into areas that businesses and state and local government should be into.”

Instead of passing 12 separate appropriations bills this year, Bogie said, Congress might choose to do smaller omnibus spending bills, or “mini-buses,” where spending legislation is packaged into three or four bills. Congress technically would pass all 12 bills by Sept. 30, but not individually.

If Congress tries to pass the same type of omnibus that Trump threatened to veto before he signed it March 23, though, Republicans could be in hot water with the president.

“If they do it the exact same way that they did it last time, he probably doesn’t sign it or at least that threat is out there; if they pass more bills or most of the bills and then put them into an omnibus, then I think he probably signs it,” Bogie said.

Congress has no excuse for failing to start work on the budget, McClintock said.

“I think it would be an inexcusable dereliction of duty for the House Budget Committee to fail to produce a budget, and I am disappointed and embarrassed that it has not even begun that work, now a full week after the deadline for the House to adopt a budget,” the California Republican said.

“That’s why the RSC budget is so important,” he said. “It is the only credible and comprehensive plan put forward in this session to turn us back toward fiscal solvency before it is too late.”