Conservatives Want a House Speaker Who Will Deliver on Promised Reforms 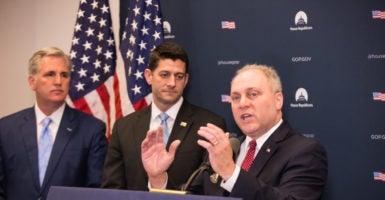 Conservative lawmakers say they want the next speaker of the House to be committed to issues Republicans ran on, and to making important procedural reforms.

“More important than who the speaker is next year is what Republicans do this year,” Rep. Jim Jordan, R-Ohio, told The Daily Signal.

“And if we don’t get focused on and stay focused on what the American people elected us to do,” Jordan said, “then there’s not going to be a race for a Republican speaker. It will be a race for who is the minority leader. So that is what we have to be focused on.”

Jordan and two other House conservatives spoke recently with The Daily Signal about what they want to see in House Speaker Paul Ryan’s successor. The lawmakers and two GOP aides emphasized following through on issues Republicans campaigned on in 2016 and earlier, including repealing Obamacare, fixing the immigration system and building a border wall, and reforming welfare programs.

As for changes in process, one senior aide said, conservatives want more clarity and order in budget procedures and to see themselves with more representation on prominent House committees such as the Ways and Means Committee or Rules Committee.

Ryan, R-Wis., announced April 11 that he will not run for re-election to the House in November, saying he wants to spend more time with his family so that his kids don’t end up knowing him as a “weekend dad.”

Ryan himself has questioned in both public and private “how much power is consolidated in the leadership team,” Rep. Jim Banks, R-Ind., told The Daily Signal in an interview last week.

That concern plays out “when we have votes on spending deals,” Banks said, “and there’s way too much power consolidated in the leadership team that needs to be delegated to rank-and-file members.”

Banks said he plans to press for “having an open process on the floor and opportunities for rank-and-file members to file [budget] amendments.”

Several names in and out of Republican leadership have been floated as possible replacements, including Majority Leader Kevin McCarthy of California, Majority Whip Steve Scalise of Louisiana, and Jordan, a former chairman of the conservative House Freedom Caucus.

Politico reported April 13, however, that Scalise, No. 3 in House leadership behind Ryan and McCarthy, is throwing his support behind McCarthy.

Jordan told The Daily Signal last week that lawmakers need to focus on fulfilling promises to the American voter, so that Republicans aren’t voting for a minority leader rather than a speaker after the November elections because they have lost the House majority.

The Ohio lawmaker said he would consider throwing his hat into the speaker’s race, but that he is more concerned with making sure Republicans don’t lose control of the House.

“We need to do welfare reform, we need to make these tax cuts permanent, we need to look at making sure we get the border security wall built, we need to stand up for basic American values and principles,” Jordan said. “But, if … we keep doing things like the omnibus [spending bill] that passed three and a half weeks ago, then we’re in trouble.”

A conservative House aide told The Daily Signal that conservatives will find another candidate for speaker if McCarthy, thought to be the frontrunner for speaker, does not promise the changes they seek.

Another congressional aide told The Daily Signal that conservatives believe they will have a better platform to advance their values with McCarthy at the helm, rather than Scalise:

The next speaker will need 218 votes to win a roll-call vote on the House floor.

Both the 150-plus-member Republican Study Committee and the 30-plus-member Freedom Caucus will have sway on the process, as leading candidates can’t afford to lose the votes of lawmakers in either group to win the speakership.

Rep. Dave Brat, R-Va., told The Daily Signal last week in a phone interview that he wants the next speaker to commit in writing to reforms that Republicans have failed to deliver on.

He wants “a total commitment to keeping our promises,” Brat said, “because right now, if we put together that we are for a set of reforms, well, we just failed to keep our promises on some of the major reforms we promised: on Obamacare repeal, and on immigration, and the budget, the omnibus.”

Brat floated an idea for accountability and reform similar to then-Speaker Newt Gingrich’s Contract With America in 1994. That written summary of legislation Republicans hoped to pass in the first 100 days of the 104th Congress was credited with helping propel Republicans to take over both the House and Senate.

“I want things in writing, right? Because we get these oral commitments, but they never come to pass,” Brat said. “And so we kind of want a harder format for promises in writing, kind of like a Contract With America but … regarding just the primary Republican principles in our own platform that we still believe in and that we want to see through.”