The Labor Board Is Now GOP-Run. Here’s 1 Big Change It Could Make to Rein In Unions. 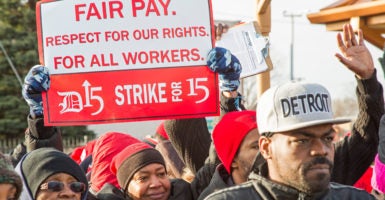 An Obama administration rule that fast-tracked elections to establish unions at private companies could be on the chopping block of a federal labor agency three years after going into effect.

The new Republican majority on the National Labor Relations Board, led by recently confirmed chairman John Ring, could do what Republicans in Congress failed to do three times—eliminate what opponents call “ambush elections.”

“The unions wanted to make it as quick as possible to have an election,” Patrick Semmens, spokesman for the National Right to Work Foundation, told The Daily Signal. “One way to do that is to push aside basic issues until after the elections, such as who is eligible to vote.”

The “ambush” nickname arose because under the National Labor Relations Board rule, which took effect April 14, 2015, union elections may be held in as few as 10 days after a union petition is approved.

This change in the final two years of President Barack Obama’s eight years in office leaves little time for discussion from both sides, critics say. Before the NLRB rule, the average gap was 38 days.

Critics contend that a short time span limits how long a company has to respond and employees have to get more information to make an informed decision.

“Unions usually have all their ducks in a row before an election, so this was set up so that firms could not counter,” David Kreutzer, senior research fellow for labor, markets, and trade at The Heritage Foundation, told The Daily Signal.

“This was to stem the outflow of union membership and attempt to reverse it,” Kreutzer said. “The NLRB in the last years of the Obama administration did a lot of favors for unions.”

Another expected action by the new NLRB majority is the unraveling of the Obama franchising rule, which allows an employee of one store or restaurant to take action against an entire national chain.

The public comment period for changing the rule closed Wednesday. In December, under the 2-2 split on the board, the NLRB announced it would review comments regarding union election rules.

Since the rule went into effect, more than 4,000 union certification elections have occurred, according to NLRB statistics.

The existing rule also requires employers to disclose their employees’ personal contact information to union organizers, and prohibits the company or union organizers from reviewing voter eligibility issues until after the election.

“Under the Obama rule, the employer has to relinquish cellphone numbers, personal emails, and times that workers are at home,” the National Right to Work Foundation’s Semmens said. “We requested an opt-out.”

The foundation, in its public comment, also asks the NLRB to put an “expiration date” on union representation, Semmens said.

The group seeks a requirement for a periodic assessment of whether at least a bare majority of workers support keeping the union. If not, workers could vote in a re-certification election.

Semmens cited a 2016 study by The Heritage Foundation that found 94 percent of union workers never cast a secret ballot to accept the union.

“The choice to be made for these workers, in many cases, was made half a century ago,” Semmens said. “A politician doesn’t get to stay in office for life after one election.”

Neither the AFL-CIO, a 62-year-old umbrella group that advocates for unions, nor the large Service Employees International Union responded to inquiries from The Daily Signal for comment for this report.

During the Obama administration, the NLRB adopted the rule while Mark Gaston Pearce, a Democrat, was chairman.

In early 2015, the Republican-controlled Congress passed a bill eliminating the “ambush election” rule, but  Obama vetoed it that March.

Obama said the rule represented “commonsense, modest changes to streamline the voting process for folks who wanted to join a union.”

“Unfortunately, the Republican Senate and House decided to put forward a proposal to reverse those changes,” Obama said. “I think that’s a bad idea. … And one of the freedoms of folks here in the United States is, is that if they choose to join a union, they should be able to do so, and we shouldn’t be making it impossible for that to happen.”

Employees have the right to unionize, but they also should hear each side of the argument, said Russ Brown, CEO of RWP Labor, a labor relations consulting firm, and president of the Center for Independent Employees, which provides legal help for union decertification elections.

“Many times unions are not truthful with employees in campaigns. They are always one-sided,” Brown told The Daily Signal. “The [business] owner should have the right to educate the workforce on what it means to be in a union and what it means to the business.”

Congress tried and failed to override Obama’s veto saving the rule in 2015, which requires a two-thirds supermajority.

Last year, the House voted to eliminate the rule. Senate Republicans sponsored a similar measure, but it did not pass.