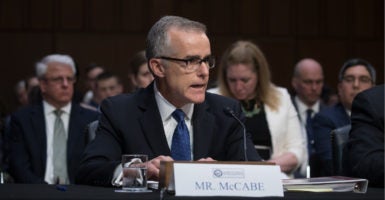 Andrew McCabe, then acting FBI director, testifies before the Senate intelligence committee on May 11, 2017. The Justice Department's internal watchdog made a referral to prosecutors for a criminal investigation of McCabe. (Photo: Jeff Malet Photography/Newscom)

The Justice Department’s internal watchdog has asked for a criminal probe of the FBI’s recently ousted top deputy for leaking and lying to investigators, several media outlets report.

Michael Horowitz, inspector general at the Justice Department and an appointee of President Barack Obama, sent a criminal referral on Andrew McCabe to prosecutors in the U.S. Attorney’s Office for the District of Columbia, according to news reports Thursday.

On March 16, Attorney General Jeff Sessions, acting on the recommendation of the Office of Professional Responsibility—which cited the inspector general’s findings—fired McCabe just hours before his formal retirement with eligibility for a full pension.

An earlier inspector general’s report on McCabe made a “compelling case” that he had repeatedly lied to investigators, Ron Hosko, a former assistant director of the FBI, told The Daily Signal.

However, Hosko asserted, such cases rarely rise to the level of prosecution. Lying under oath is a felony, but it is often “selectively prosecuted,” he said.

“The leak [to news reporters] itself wasn’t of classified information,” Hosko told The Daily Signal. “It’s somewhat extraordinary. But I’m not surprised considering the political vitriol directed at Andrew McCabe.”

The Justice Department, reached late Thursday, declined to comment to The Daily Signal.

Judicial Watch, a conservative government watchdog group, first exposed in 2016 potential conflicts of interest for McCabe through documents obtained through the Freedom of Information Act.

“The wheels of justice finally caught up with McCabe for repeatedly lying under oath to investigators,” Judicial Watch President Tom Fitton said in a statement. “It’s high time America had some accountability for his misconduct.”

Rep. Jim Jordan, R-Ohio, was among members of Congress who supported the criminal referral to federal prosecutors.

In America, no one is above the law. Lying under oath is a crime. This referral is the right move. https://t.co/UI9zW7RgVW

McCabe’s lawyer told the Associated Press that he was confident his client would not be charged unless the Trump administration applied “inappropriate pressure.”

McCabe was the FBI’s No. 2 official under both Director James Comey, fired last May by President Donald Trump, and Christopher Wray, who took the reins in August.

During an interview to promote his book that aired Sunday on ABC, Comey backed the findings of the inspector general report on McCabe that was released to the public, and took credit for initiating that report.

“It’s not OK. The McCabe case illustrates what an organization committed to the truth looks like,” Comey said. “I ordered that investigation.”

McCabe retorted that Comey knew of and authorized his leaks.

By earlier this month, McCabe had raised more than $550,000 in an online crowdfunding campaign to help pay his legal bills.

The inspector general’s probe looked into who leaked to The Wall Street Journal in October 2016 that the FBI was investigating the Clinton Foundation.

The leak came after reports that Clinton confidant and then-Virginia Gov. Terry McAuliffe’s super PAC donated to the state Senate campaign of the deputy FBI director’s wife, Jill McCabe, who like McAuliffe and Clinton is a Democrat.

This prompted critics to suggest it was a self-serving leak to prove McCabe didn’t go easy on Hillary Clinton during the FBI probe of her use of a private email server to conduct official business while she was secretary of state.

Comey announced in July 2016, four months before the presidential election when Clinton faced Trump at the polls, that the FBI had decided she should not be charged.

The new development exposes a bigger problem with the Justice Department, Fitton said:

In a related development, former New York Mayor Rudy Giuliani announced Thursday that he will join Trump’s legal team in hopes of helping to wrap up the probe of Russian meddling in the election led by special counsel Robert Mueller.

Giuliani, perhaps best known as New York’s mayor during the 9/11 attacks, was a federal prosecutor before seeking elected office. He dropped out of the Republican race for president in 2008.