Republicans Call for Justice Department Investigation Into Comey, Clinton, Others 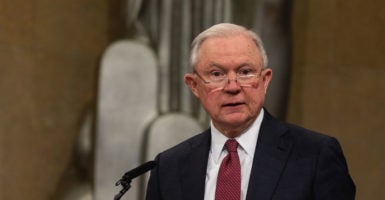 “Those in positions of high authority should be treated the same as every other American,” Republican lawmakers say in a letter to Attorney General Jeff Sessions, FBI Director Christopher Wray, and U.S. Attorney for the District of Utah John Huber. (Photo: Cheriss May/Sipa USA/Newscom)

A group of House Republicans has called for the Department of Justice to investigate a laundry list of former agency heads and people involved in the investigation into former Secretary of State Hillary Clinton’s private email server.

The letter is addressed to Attorney General Jeff Sessions, FBI Director Christopher Wray, and U.S. Attorney for the District of Utah John Huber. It asks that each of these men use their respective powers to investigate “potential violation(s) of federal statues” on the part of Clinton and of former FBI Director James Comey, Attorney General Loretta Lynch, acting FBI Director Andrew McCabe, FBI agent Peter Strzok, and FBI counsel Lisa Page.

The representatives include members of the conservative House Freedom Caucus—including Rep. Ron DeSantis of Florida, Dave Brat of Virginia, and Paul Gosar of Arizona—and other GOP House members, like Claudia Tenney of New York.

“Those in positions of high authority should be treated the same as every other American” and because of that the members want to be sure that any “potential violations of law” be “vetted appropriately,” the group of Republican lawmakers wrote.

“In doing so, we are especially mindful of the dissimilar degree of zealousness that has marked the investigations into former Secretary of State Hillary Clinton and the presidential campaign of Donald Trump, respectively,” the lawmakers added.

The group argues that Comey mishandled the Clinton email investigation, an investigation it believes to be “motivated by a political agenda.”

The FBI released documents in October 2017 showing that Comey started drafting a letter regarding the email probe months before the former FBI director began conducting key interviews. The letter recommended that charges not be brought against Clinton.

House Republicans aren’t the only ones who believe Comey mishandled the Clinton case. Deputy Attorney General Rod Rosenstein wrote a damning memo in May 2017 in which he claimed Comey made “serious mistakes” in conducting the investigation.

“Almost everyone agrees that the Director made serious mistakes; it is one of the few issues that unites people of diverse perspectives. The way [Comey] handled the conclusion of the email investigation was wrong,” Rosenstein wrote. “As a result, the FBI is unlikely to regain public and congressional trust until it has a Director who understands the gravity of the mistakes and pledges never to repeat them.”

The group of congressmen also questions the former FBI director’s use of memos, claiming it created a “paper trail” that was then used to leak classified information to a Columbia University professor who is friends with Comey. The professor, Daniel Richman, says the FBI requested the memos he obtained from Comey and that he “voluntarily agreed” to hand them over.

Many on the Republican side of the aisle see Comey’s move as dubious and question the legality of those leaks. Four of the seven memos Comey drafted contained secret or confidential information. Comey leaked four of the memos to his confidant, Richman. Arithmetically, the numbers suggest Comey released classified information to a civilian.

House Republicans want Clinton to get investigated for “disguising payments to Fusion GPS,” an opposition research firm behind the Trump dossier, “on mandatory disclosures to the Federal Election Commission.”

The group is asking that Lynch be investigated for “her decision to threaten with reprisal the former FBI informant who tried to come forward in 2016 with insight into the Uranium One deal.”

The Clinton Foundation has found itself at the center of a number of alleged pay-to-play schemes. A few of the most notable include Laureate Education and Uranium One. Lawmakers believe Lynch used her power as attorney general to block the informant from coming forward with information regarding the Uranium One deal.

Lawmakers also want an investigation into Strzok and Page’s involvement in a potential interference scheme in the Clinton private email case. Strzok and Page had an ongoing, intimate relationship.

The group is also interested in reported texts between Strzok and Page that appear to show the FBI eliminated evidence that Clinton compromised “high-level communications.”