How 4 Big Comey Claims Stack Up to His Senate Testimony 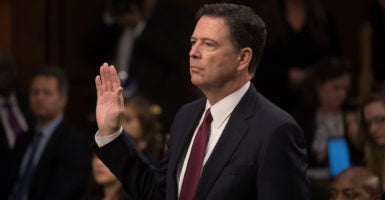 The recently fired FBI director, James Comey, is sworn in before his testimony to the Senate intelligence committee on June 8, 2017. (Photo:Jeff Malet Photography/Newscom)

Portions of former FBI Director James Comey’s new book on the end of his law enforcement career conflict with the facts as presented by the Trump administration, Comey’s recently fired top deputy, and both Republican and Democrat leaders.

“My experience with Comey is [that he is] a patriotic, engaging, smart American who tried to find the right, apolitical result for the FBI at a time we had two deeply flawed presidential candidates,” Ron Hosko, a former assistant director of the FBI’s Criminal Investigative Division, told The Daily Signal, referring to the agency’s probes of Donald Trump and Hillary Clinton in 2016.

Others are more skeptical of some of the assertions by Comey, 57, in “A Higher Loyalty: Truth, Lies, and Leadership,” to be released Tuesday.

“You know you’re in trouble in Washington when neither the left nor the right, Republican or Democrat, takes you seriously any longer,” J. Christian Adams, a former Justice Department lawyer, told The Daily Signal.

“I don’t think this book will be read by many people. I don’t think we’ll be talking about it in two weeks,” Adams said.

Here are four key issues Comey has emphasized, some mentioned in the book and his interview with George Stephanopoulos of ABC News that aired Sunday night.

Comey used bad judgment in publicly talking about the Clinton case both in his July 5, 2016, press conference, and when he briefly reopened the case Oct. 28, 2016, said Hosko, now president of the Law Enforcement Legal Defense Fund, which provides legal advice and covers some legal fees in duty-related cases.

In the July press conference, Comey concluded his remarks by saying “no reasonable prosecutor” would pursue charges against Clinton even though she had been “extremely careless” in conducting official business over a private email server.

“I understand his logic,” Hosko said, referencing the perception of conflicted created when Attorney General Loretta Lynch, Comey’s boss, privately met with former President Bill Clinton in June 26, 2016, at an airport in Phoenix. He called that meeting “the original sin.”

“But FBI policy is to not engage in public discussion about cases,” Hosko said. “It gives voice to those who say [Comey] was an attention seeker and a spotlight grabber.”

In the book, Comey reportedly says he wishes that he had announced at the top of the July 2016 press conference that the FBI would not recommend prosecuting Clinton regarding her classified communications as secretary of state on a private email server—as opposed to building up the suspense and saying that toward the end.

Comey announced the reopening of the email probe in late October and then announced it was again closed the weekend before the election.

“I have read she has felt anger toward me personally, and I’m sorry for that,” Comey writes of Clinton. “I’m sorry that I couldn’t do a better job explaining to her and her supporters why I made the decisions I made.”

His public handling of the case was influenced by the assumption Clinton would win, Comey writes: “Certainly not consciously, but I would be a fool to say it couldn’t have had an impact on me.”

In his ABC News interview with Stephanopoulos, a former aide to Bill Clinton, Comey added:

I don’t remember spelling it out, but it had to have been, that she’s going to be elected president and if I hide this from the American people, she’ll be illegitimate the moment she’s elected, the moment this comes out. … Like many others, I was surprised when Donald Trump was elected president.

Still, Comey said President Barack Obama told him that he had appointed him for his character and reputation, and added: “I want you to know that nothing—nothing—has happened in the last year to change my view.”

Hosko said Comey’s decision to reopen the investigation so close to Election Day was likely “politically informed” but “not politically motivated.”

“If Trump had been up 15 points in the polls, what would be the point” of announcing publicly the email probe was reopened, he said.

Comey’s wife, Patrice, told ABC News: “I wanted a woman president really badly, and supported Hillary Clinton. A lot of my friends worked for her, and I was devastated when she lost.”

One week after Comey’s May 2017 testimony to the Senate Judiciary Committee, the FBI issued a correction of his explanation of why he had reopened the Clinton email investigation 11 days before the Nov. 8 election. The probe was reopened, the bureau said, because of a laptop used by former Rep. Anthony Weiner, D-N.Y., then husband to Clinton aide Huma Abedin.

Comey told the committee that Abedin had a “regular practice” of forwarding emails to the laptop and that “hundreds and thousands” had been forwarded, including messages with classified information.

In its correction letter, the FBI asserted that Abedin forwarded only a “small number” for “backup activity.”

Comey maintains in his book that Trump sought his loyalty, writing: “The demand was like Sammy the Bull’s Cosa Nostra induction ceremony.” Comey was referring to Salvatore “Sammy the Bull” Gravano, once the leader of the Gambino crime family.

He continues: “As crazy as it sounds, I suddenly had the feeling that, in the blink of an eye, the president-elect was trying to make us all part of the same family and that Team Trump had made it a ‘thing of ours.’”

On the investigation into Trump’s short-lived national security adviser, Michael Flynn, he writes that Trump said: “I hope you can let this go.”

During Comey’s June 8 testimony to the Senate Select Committee on Intelligence, Sen. Jim Risch, R-Idaho, asked the former FBI director: “He did not direct you to let it go?”

Comey answered: “Not in his words, no.”

Risch later followed up: “Do you know of any case where a person has been charged for obstruction of justice or, for that matter, any other criminal offense, where this—they said, or thought, they hoped for an outcome?”

Comey answered: “I don’t know well enough to answer. And the reason I keep saying his words is I took it as a direction.”

A month earlier, during Comey’s May 3 testimony to the Senate Judiciary Committee, Sen. Mazie Hirono, D-Hawaii, asked: “So if the attorney general or senior officials at the Department of Justice opposes a specific investigation, can they halt that FBI investigation?”

Hirono: “Has it happened?”

Comey: “Not in my experience.”

Hosko, the former FBI official, said there was reason for Comey to believe the president was giving an indirect order on Flynn.

“It could be construed as an order or a wish from someone who has the power to fire you,” Hosko said.

3. Leaking to the Media

Senate Judiciary Chairman Charles Grassley, R-Iowa, asked during the May 3 hearing: “Director Comey, have you ever been an anonymous source in news reports about matters relating to the Trump investigation or the Clinton investigation?”

Grassley: “Have you ever authorized someone else at the FBI to be an anonymous source in news reports about the Trump investigation or the Clinton investigation?”

Grassley: “Has any classified information relating to President Trump or his association—associates been declassified and shared with the media?”

Comey: “Not to my knowledge.”

However, when FBI Deputy Director Andrew McCabe was fired in late March for leaking, he said, “It was not a secret, it took place over several days, and others, including the director, were aware of the interaction with the reporter.”

Adams, now president of the Public Interest Legal Foundation, which monitors voter fraud, said he believes there are clear questions about Comey’s leaking.

“It appears he wasn’t telling the truth in front of Congress, but I don’t think anything will happen to him,” Adams said.

During the Senate intelligence committee hearing in June, Comey explained how he leaked his FBI memos through a friend who is a law professor, to spur appointment of a special counsel.

“The president tweeted on Friday, after I got fired, that I better hope there’s not tapes,” Comey told the committee. “I woke up in the middle of the night on Monday night, because it didn’t dawn on me originally that there might be corroboration for our conversation. There might be a tape.”

The so-called Steele dossier, a raw, unverified, 35-page document alleging ties between Trump and the Kremlin that included lurid allegations regarding Russian prostitutes, was a big part of Comey’s interview on ABC News.

“It was coming from a credible source, someone with a track record, someone who was a credible and respected member of an allied intelligence service during his career,” Comey said, referring to former British intelligence agent Christopher Steele. “And so it was important that we try to understand it, and see what could we verify, what could we rule in or rule out.”

He added: “I was told at some point that it was—the effort had originally been financed by a Republican source to develop material, opposition research on Donald Trump.”

Comey told ABC’s Stephanopoulos that he didn’t inform Trump, in describing the document during his first meeting with the newly inaugurated president, that it was the product of opposition research.

But, he said to Stephanopoulos, “Well, certainly the source was credible.”

Comey said he isn’t “sure” how much of the information in the dossier checked out.

In a March 2017 hearing by the House Judiciary Committee, Rep. Peter King, R-N.Y., asked the FBI director about the leaking of the fact that Comey briefed Trump on the dossier.

“Any unauthorized disclosure of classified conversations or documents is potentially a violation of law and a serious, serious problem,” Comey said. “I’ve spent most of my career trying to figure out unauthorized disclosures and where they came from. It’s very, very hard. Often times, it doesn’t come from the people who actually know the secrets. It comes from one hop out, people who heard about it or were told about it.”