The Student Data-Mining Scandal Under Our Noses 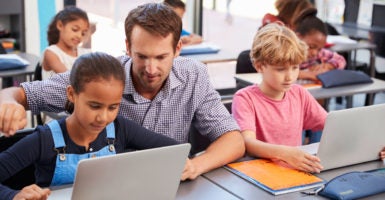 Facebook is just one of the tech giants partnering with the U.S. Department of Education and schools nationwide in pursuit of student data for meddling and profit. (Photo: monkeybusinessimages/Getty Images)

While congresscritters expressed outrage at Facebook’s intrusive data grabs during Capitol Hill hearings with Mark Zuckerberg this week, not a peep was heard about the Silicon Valley-Beltway theft ring purloining the personal information and browsing habits of millions of American schoolchildren.

It doesn’t take undercover investigative journalists to unmask the massive privacy invasion enabled by educational technology and federal mandates. The kiddie data heist is happening out in the open—with Washington politicians and bureaucrats as brazen co-conspirators.

Facebook is just one of the tech giants partnering with the Department of Education and schools nationwide in pursuit of student data for meddling and profit. Google, Apple, Microsoft, Pearson, Knewton, and many more are cashing in on the Big Data boondoggle.

As parent and educational privacy advocate Cheri Kiesecker reported, the Facebook/Digital Promise partnership is “a wonderful data collection and marketing tool for Facebook and the US Department of Ed, but it is incredibly alarming for students’ privacy and security.”

Facebook is on the march from luring adult students into its orbit to encroaching on secondary and elementary school-age users through its Messenger Kids app and “whole-child personalized learning” programs funded through the Chan Zuckerberg Initiative.

CZI, a “philanthropic investment company” funded with up to $1 billion in Facebook shares over the next three years, is headed by Jim Shelton. He’s a former program officer at the Gates Foundation and a key Common Core champion in the Obama administration.

“Personalized learning” is an edutech buzz phrase for hijacking the classroom and hooking students and teachers on branded software and hardware—iPads, SMART Boards, computerized portfolios, homework apps, you name it—without any evidence that such shiny objects improve academic performance.

Under the guise of customizable assessments, public and private preschools in Colorado experimented with toddlers whose student activities and social/emotional behaviors were tracked using the TS Gold (Teaching Strategies Gold) system—funded with $30 million in Race to the Top subsidies under the Obama administration.

As I reported in 2014, parent Lauren Coker discovered that TS Gold assessors in her son’s Aurora, Colorado, public preschool had recorded information about his trips to the bathroom, his hand-washing habits, and his ability to pull up his pants.

Sunny Flynn, a mom with kids in Jefferson County, Colorado, asked all the right questions: “What security measures are being used to protect this data? Who exactly has access to this data? How long will the data be stored? What is the proven benefit of a kindergarten teacher putting all of this data into a database?”

With little public oversight, Google has infiltrated schools through its “free” Google Apps for Education suite. As I’ve reported previously, Google is building brand loyalty through its questionable certification program that essentially turns teachers into tax-subsidized lobbyists for the company. GAFE enrollees are “trained” on Google products, earn certification, and then open up consultancy businesses and bill their school districts (i.e., the public) to hawk Google’s suite of products to other colleagues.

And this week, 23 parent and watchdog groups filed a complaint with the Federal Trade Commission alleging that Google is violating child protection laws by collecting personal data of and advertising to those aged under 13.

Over the past four years, Google has admitted “scanning and indexing” student email messages sent using GAFE and data mining student users for commercial gain when they use their accounts for noneducational purposes. Google can collect student/family data to target ads through related services outside the GAFE suite, such as YouTube for Schools, Blogger and Google Plus. These are not covered under the already watered-down federal Family Educational Rights and Privacy Act.

Under the Obama years, Grand Canyon-sized loopholes in federal student and family privacy protections opened data mining to third-party private entities. Those have yet to be closed by the Trump administration. Why not? It’s time to drain the student data-mining swamp and their facilitators in Washington. For the children.