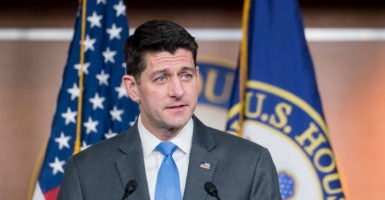 House Speaker Paul Ryan announces that he will not seek another term in Congress during a press conference Wednesday on Capitol Hill. (Photo: Erin Schaff/UPI/Newscom)

House Speaker Paul Ryan announced Wednesday that he will not seek re-election, shortly after telling confidants and then the House’s Republican conference.

The news came months after rumors first surfaced that Ryan would retire, and continued to resurface. The Wisconsin Republican, speaker since 2015, told House members close to him as well as his staffers Wednesday morning that he will not run for re-election.

Ryan, 48, made his pending retirement official in an appearance before reporters.

Serving as speaker has been a great honor. Now, with all three of my kids in their teens, I am ready to set new priorities. I intend to serve my full term as I was elected to do. But I will be retiring in January, leaving this majority in good hands and with a bright future. pic.twitter.com/LfyZtZOIn4

“This morning, Speaker Ryan shared with his colleagues that this will be his last year as a member of the House,” Brendan Buck, counselor to the speaker, said in a formal statement.

“He will serve out his full term, run through the tape, and then retire in January,” Buck said. “After nearly 20 years in the House, the speaker is proud of all that has been accomplished and is ready to devote more of his time to being a husband and a father.”

“While he did not seek the position, he told his colleagues that serving as speaker has been the professional honor of his life, and he thanked them for the trust they placed in him,” Buck said.

The question now is who will replace Ryan as speaker. House Majority Whip Steve Scalise, the No.3 Republican in the House,  announced his interest in Ryan’s job publicly in an interview in late March.

The Louisiana Republican said he would be interested in “moving up” in leadership and mentioned in an interview with Politico that he believes he has a “strong influence” on legislation in Congress.

Scalise, however, made it clear at the time that talk of Ryan’s retirement was “rumors.”

Some allies of Scalise also say he would seek the position only if  the No. 2 House Republican, Majority Leader Kevin McCarthy, R-Calif., did not have the votes to win the speakership.

“I wouldn’t rule it out,” Scalise said in the interview. “Obviously, I’ve shown interest in the past at moving up. I’ve enjoyed being in leadership. I feel like I’ve had a strong influence on some of the things that we’ve done, and I’ve helped put together coalitions to pass a full repeal of Obamacare.”