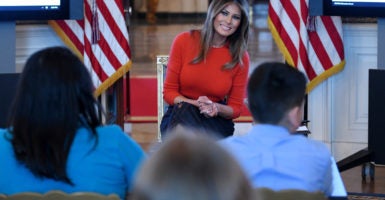 “I’m very excited that you’re here today with me, and thank you in advance for sharing your stories and your thoughts about your struggles and triumphs. I want to help children everywhere to be their best,” the first lady told the children.

“With your help, we can achieve positive results,” she said.

According to the White House, the listening session was a chance for the students, ages 10 to 13, to speak with the president’s wife “about their day-to-day lives.” DeVos introduced the first lady.

We had an informative listening session at the @WhiteHouse today. Thank you to each of the students who shared their thoughts & feelings with me. I am listening and know that together, we can work towards ensuring children everywhere can be their very best. pic.twitter.com/tOzhJD6Qbj

The middle school students talked with the first lady about their feelings as well as daily encounters.

At one point, she invited them to write down how they feel at school or at home.

The first lady wrote “excited,” as the children wrote words such as “nervous” and “respected.”

One student accidentally knocked over a glass of water, prompting the first lady to reassure him.

The first lady’s public cause is the well-being of children.

Stephanie Grisham, the first lady’s communications director, told Slate magazine early this year that she wants to focus on “the overall well-being of children and teaching [them] how to grow up happy and healthy and become morally responsible adults.”

On the Thursday before Easter, the first lady made a surprise visit to St. Mary’s Medical Center in West Palm Beach, where she spent time with hospitalized children and gave them Easter baskets. During a trip abroad to Rome last May, she stopped at a children’s hospital.

On the campaign trail, she said she intended to focus on fighting cyberbullying, and faced some backlash for it from critics who argued President Donald Trump sometimes acts like a bully on Twitter.

In March, she hosted a roundtable with tech executives to discuss cybersafety and children.

“I am well aware that people are skeptical of me discussing this topic. I have been criticized for my commitment to tackling this issue, and I know that will continue,” she said.

Melania Trump also took a prominent role in several events on the opioid drug crisis held by the administration.

On March 19 in New Hampshire, she introduced the president before his remarks on drug dealers, the death penalty, and the opioid epidemic.

Earlier in March, she opened up the White House Opioids Summit and emphasized helping young mothers who struggle with addiction.

“I’m so proud of the work that this administration has already done to combat this epidemic,” the first lady said.

“Our unified goal is that of helping all who have been affected by drug addiction, and for me that means focusing on babies and young mothers.”

The first lady added three positions to her staff in January: a communications coordinator, Annie LeHardy; a director of operations, Justin Caporale; and a director of policy, Reagan Thompson.

“Each person filling their respective and vital role has shown true professionalism in their chosen career, and I am confident they will enhance my work on behalf of children everywhere, while helping me further expand my role as First Lady of the United States,” she said in a formal statement.