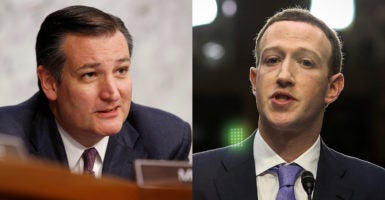 Sen. Ted Cruz, R-Texas, and Facebook CEO Mark Zuckerberg sparred over political bias and censorship during the Senate’s hearing Tuesday. Lawmakers questioned Zuckerberg about the social media company and its handling of user data. Cruz specifically asked if Facebook considers itself a neutral public forum. A full transcript of their exchange is below.

Zuckerberg: “Senator, we consider ourselves to be a platform for all ideas.”

Cruz: “Let me ask the question again. Does Facebook consider itself to be a neutral public forum? And representatives of your company have given conflicting answers on this. Are you a First Amendment speaker expressing your views, or are you a neutral public forum allowing everyone to speak?”

Zuckerberg: “Senator, here is how we think about this: I don’t believe that – there is certain content that clearly we do not allow. Right? Hate speech, terrorist content, nudity, anything that makes people feel unsafe in the community. From that perspective, that’s why we generally try to refer to what we do as a platform for all ideas.”

Zuckerberg: “Well, Senator, our goal is certainly not to engage in political speech. I’m not that familiar with the specific legal language of the law that you speak to, so I would need to follow up with you on that. I’m just trying to lay out how broadly I think about this.”

Cruz: “Mr. Zuckerberg, I will say there are a great many Americans, who I think are deeply concerned that Facebook and other tech companies are engaged in a pervasive pattern of bias and political censorship. There have been numerous instances with Facebook. In May of 2016, Gizmodo reported that Facebook had purposefully and routinely suppressed conservative stories from trending news, including stories about CPAC, including stories about Mitt Romney, including stories about the Lois Lerner IRS scandal, including stories about Glenn Beck. In addition to that, Facebook has initially shut down the ‘Chick-Fil-A Appreciation Day’ page, has blocked a post of a Fox News reporter, has blocked over two dozen Catholic pages, and most recently, blocked Trump supporters Diamond and Silk’s page with 1.2 million Facebook followers, after determining their content and brand were, ‘unsafe to the community.’ To a great many Americans, that appears to be a pervasive pattern of political bias. Do you agree with that assessment?”

Zuckerberg: “Senator, let me say a few things about this. First, I understand where that concern is coming from because Facebook and the tech industry are located in Silicon Valley, which is an extremely Left leaning place. And this is actually a concern that I have and that I try to root out in the company is making sure that we don’t have any bias in the work that we do, and I think it is a fair concern that people would at least wonder about.”

Cruz: “So let me ask this question. Are you aware of any ad or page that has been taken down from Planned Parenthood?”

Zuckerberg: “Senator, I’m not. But let me just, can I finish?”

Zuckerberg: “I’m not specifically aware of those.”

Cruz: “How about any Democratic candidate for office?”

Zuckerberg: “I’m not specifically aware. I mean, I’m not sure.”

Zuckerberg: “No, Senator. We do not generally ask people about their political orientation when they’re joining the company.”

Cruz: “So as CEO, have you made hiring or firing decisions based on political positions or what candidates they supported?”

Cruz: “Why was Palmer Luckey fired?”

Zuckerberg: “That is a specific personnel matter that seems like it would be inappropriate to speak to here.”

Cruz: “You made a specific representation that you didn’t make decisions based on political views. Is that accurate?”

Zuckerberg: “I can commit that it was not because of a political view.”

Cruz: “Do you know of the 15,000 to 20,000 people engaged in content review, how many, if any, have ever supported financially a Republican candidate for office?”

Zuckerberg: “Senator, I do not know that.”

Cruz: “Your testimony says, ‘It is not enough that we just connect people. We have to make sure those connections are positive.’ It says, ‘We have to make sure people aren’t using their voice to hurt people or spread misinformation. We have a responsibility not just to build tools, but to make sure those tools are used for good.’ Mr. Zuckerberg, do you feel it’s your responsibility to assess users whether they are good and positive connections or ones those 15,000 to 20,000 people deem unacceptable or deplorable?”

Zuckerberg: “Senator, I think that there are a number of things that we would all agree are clearly bad. Foreign interference in our elections, terrorism, self-harm. Those are things…”

Zuckerberg: “Oh, well, I think that you would probably agree we should remove terrorist propaganda from the service. So that I agree, I think is clearly bad activity that we want to get down and we are generally proud of how well we do with that. Now, what I can say, and I do want to get this in before the end here, is that I am very committed to making sure that Facebook is a platform for all ideas. That is a very important, founding principle of what we do. We’re proud of the discourse and different ideas that people can share on the service, and that is something that as long as I’m running the company, I’m going to be committed to making sure is the case.”