Court Puts Politics Above Law in State’s Lawsuit Against Trump 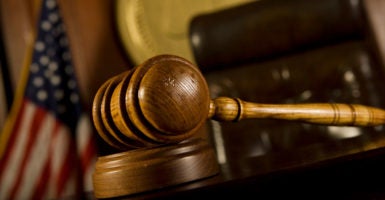 Maryland and the District of Columbia are applying an interpretation of the Constitution that would have implicated Presidents George Washington and Barack Obama. (Photo: IPGGutenbergUKLtd/Getty Images)

A federal court has held that Maryland and the District of Columbia have standing to sue President Donald Trump over his personal finances regarding the Trump International Hotel in Washington, D.C., in what amounts to a political attack thinly veiled as a far-fetched constitutional theory.

The plaintiffs claim that Trump violates the Constitution’s foreign emoluments clause and presidential compensation clause any time anyone who represents any foreign government or state, respectively, confers anything of value to Trump or any part of the Trump Organization business conglomerate.

That gets the purpose of those provisions fundamentally wrong.

But the plaintiffs—two state attorneys general, Brian E. Frosh, D-Md., and Karl A. Racine, D-D.C.—claim that those clauses also reach transactions as remote from the president’s duties as a state or foreign politician paying the going rate to stay, dine, or host events at the Trump International Hotel.

Under that reasoning, Presidents George Washington and Barack Obama violated the Constitution whenever state or foreign politicians bought one of Washington’s Mt. Vernon farm goods or one of Obama’s books.

One must wonder, where was the outrage in both the first and the last administration? Neither Washington nor Obama faced an emoluments lawsuit during their two terms in office.

For now, however, those issues remain on the horizon.

The opinion of the District Court for the District of Maryland, written by Senior Judge Peter J. Messitte, only addressed standing: the constitutional requirement that plaintiffs show that they have suffered some concrete injury; that the person whom they are suing caused their injury; that the court can remedy their injury; and that the case belongs in the courts and not with the political branches.

In Alfred L. Snapp & Son, Inc. v. Puerto Rico (1980), in which the court held that Puerto Rico could sue apple growers for violating federal labor laws, the Supreme Court explained when states can file a lawsuit as parens patriae, which traditionally referred to the king’s “royal prerogative” to act as guardian for so-called idiots, infants, and lunatics.

In this country, that prerogative fell to states as a way to defend the welfare of all their residents (not just idiots, infants, and lunatics)—or at least many of them, not just a few favorites—in court.

But in order for a state to do so, under Snapp & Son, the state must have suffered an injury to some “quasi-sovereign interest”: which Snapp & Son called a “judicial construct” that defies “simple or exact definition,” whose “vagueness … can only be filled in by turning to individual cases.”

So, the court listed cases dealing with water and air pollution and other public nuisances, illegal price fixing schemes, and comparable harms that affect broad swaths of a state population’s physical or economic welfare.

In the case against Trump, however, the plaintiffs barely left out the kitchen sink, alleging a host of injuries to four kinds of purported state interests: 1) sovereign; 2) quasi-sovereign; 3) proprietary; 4) and parens patriae.

While Messitte rejected some of those claims as being beyond the pale, none should have passed constitutional muster.

Considering them in turn reveals how far some are willing to stretch the law to attack the president.

In Snapp & Son, the court found only two sovereign interests were “easily identified.” One is “the exercise of sovereign power,” such as creating and enforcing law. The other is “recognition from other sovereigns—most frequently this involves the maintenance and recognition of borders.”

Because its “1776 Declaration of Rights contained a precursor to the United States Constitution’s emoluments clauses,” Maryland argued, “the Court should infer that Maryland felt strongly about preventing corruption when it joined the union and therefore has standing to enforce these terms”—that is, Maryland has the right to enforce its own, expansive definition of what constitutes corruption.

Not only did Messitte find no law to support this far-fetched theory, he called it “highly doubtful” that Maryland would have refused to join the union if the Constitution lacked its emoluments provisions.

Still, Maryland had a back-up sovereign interest theory: that it could sue Trump to defend against losing tax revenues from hospitality businesses that compete with the Trump International Hotel. Unsurprisingly, Maryland could not show “with at least some measure of specificity how much tax revenue it may have lost to the hotel.”

And with no facts to support that theory, Messitte rejected it, too.

Next, the plaintiffs turned to so-called “quasi-sovereign interests,” which in Snapp & Son, the Supreme Court ultimately described as twofold: defending the economic and physical well-being of its residents, and ensuring that they, and the state, “are not excluded from the benefits that are to flow from participation in the federal system.”

Here, the plaintiffs claimed to be enduring the “intolerable dilemma” of being “forced to choose”: give the Trump Organization “special concessions” in future dealings, or “risk being placed at a disadvantage” to states that already have, “or may in the future,” grant such concessions.

Messitte could not refute the fact that it would be a self-inflicted injury for any state to unlawfully grant “special concessions” to the Trump Organization, or any business.

And he found “no case that recognizes an ‘intolerable dilemma’ as the basis for” standing.

So, Messitte should have also rejected this theory.

“Yet what cannot be denied,” he continued, “is that Trump Organization hotels and, through it, the president have reportedly been accorded substantial tax concessions” by D.C. and Mississippi. Messitte observed that “the District’s tax authorities, according to a report in The Washington Post, in fact granted the hotel a reduction in its 2018 tax bill for a savings of $991,367.00.”

But Messitte ignored D.C. tax authorities, who declared that those concessions “were routine and that no favoritism was involved.”

Here’s the rub: The plaintiffs, like virtually every other jurisdiction, routinely offer tax incentives to private businesses.

Recently, Maryland offered Amazon billions in grants and tax breaks to lure its second headquarters into the state. D.C. offered even more incentives in competition for Amazon’s headquarters.

When it comes to Trump, apparently, politics-as-usual justifies a lawsuit.

The plaintiffs also noted that Maine Gov. Paul LePage, a Republican, stayed at the hotel before Trump signed an executive order on national parks, which “could apply to a park and national monument in Maine.” Framing that as an official favor, Messitte concluded that other state officials may feel “coerced … to patronize the hotel in order to help them obtain federal favors.”

This is highly implausible, to say the least. Nonetheless, a federal court has now allowed states to sue the president on the grounds that one of their officials may simply not be able to resist the temptation to try, however poorly or indirectly, to bribe him.

Ironically, the plaintiffs also argue that they can sue Trump because the Trump International Hotel is eating into their own bottom lines, at the Washington Convention Center and the Bethesda Marriott Conference Center.

While the plaintiffs could not attribute any specific economic losses to the Trump International Hotel, they noted “that both Kuwait and Bahrain moved events from the Four Seasons and Ritz Carlton to the hotel after the president was elected.”

At that, Messitte concluded, “based on fairly straightforward economic logic,” that the state’s enterprises “are in fact disadvantaged in much the same way.”

Never mind that, once again, there is virtually no factual support for that conclusion.

The same is true here. This case should have been tossed out in its entirety.

Instead, the court’s opinion invites future lawsuits that sacrifice the rule of law to politics.