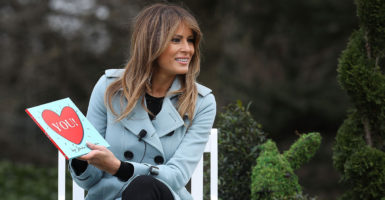 He showed a clip of Melania Trump reading to the children and mocked her accent with his sidekick, Guillermo. It’s an unoriginal hit that reflects poorly on Kimmel.

Kimmel’s strategy seemed to be belittling the first lady because of her accent, something out of her control, during a well-organized, well-attended, and successful White House event.

“Dis and dat,” Kimmel imitated her. “Guillermo—you realize what this means, you could be first lady of the United States,” he laughed.

And that wasn’t all Kimmel mocked.

“I want to really thank the first lady, Melania, who has done an incredible job. She worked so hard on this event, and so I want to thank you,” President Donald Trump said in opening remarks.

Kimmel countered:  “Not a chance she did one thing to help set that up, there’s no way.”

“The only thing” she worked on is “an escape tunnel,” he added.

Actually, Jimmy, the Easter Egg Roll is officially hosted by the first lady of the United States. This year, nearly 30,000 attended despite the dreary weather.

And as far as languages go, Melania Trump is quite accomplished. She is fluent in five languages: English, French, Slovene, German, and Italian.

It’s hard to imagine Kimmel would have thought it was “politically correct” to target a liberal woman who is an immigrant for her accent.

Yet it doesn’t appear that Kimmel—once dubbed “America’s Conscience” by CNN—is going to face any pushback from the left for his jeering at an immigrant. After all, Kimmel’s liberal views on health care and gun control have made him a media darling.

Nor is this the first time Hollywood has picked on the first lady. Actress Kristen Bell poked fun at her cyberbullying campaign at the Golden Globes in January. And comedian Chelsea Handler took a shot at her accent in August, asserting that the first lady “can barely speak English.”

just as soon as she learns how to speak English

But Rachel Campos-Duffy, a Fox News contributor and wife of Rep. Sean Duffy R.-Wis., made it clear she’s fed up with the treatment of Melania Trump.

“They never give her any credit,” Campos-Duffy said of Trump on “Fox & Friends” Thursday.

Campos-Duffy’s mother is an immigrant, so the story hit home for her.

“To be mocked for your foreign accent when you worked so hard to learn the language feels like a dagger to the heart,” Campos-Duffy said that her mother said.

In recent weeks, Melania Trump has met with Kyle Kashuv, 16, the pro-Second Amendment student from Marjory Stoneman Douglas High School in Parkland, Florida. She spent time with him learning about his app, “The Reach Out App,” and escorted him to the Oval Office, where he met with the president as well.

Wonderful to meet @KyleKashuv today. His message of unity is one we should all share. Thank you for visiting us at the @WhiteHouse & hope you enjoyed your surprise meeting with @potus! Wishing you much success w @TheReachOutApp. pic.twitter.com/K4aGydo1uX

She  hosted a roundtable in March with tech executives to discuss children and cyber safety.

In her remarks, the first lady addressed critics head-on, saying: “I am well aware that people are skeptical of me discussing this topic. I have been criticized for my commitment to tackling this issue, and I know that will continue.”

“But it will not stop me from doing what I know is right,” she added.

It was a very productive meeting on cyber safety & how to teach our children to be responsible digital citizens. Thank you @amazon @Facebook@FOSI @Google @m_Beckerman @Microsoft @Twitter & @snap for coming to the @WhiteHouse today & sharing your valuable insight and expertise. pic.twitter.com/YY2srrbYhP

Our first lady represents our country in a phenomenal manner. Among her strengths is a knack for languages and clear appreciation for different cultures.

If Kimmel wants to take a stand, and argue for policies he believes are correct, that’s fine. That’s the American way–to engage in dialogue through public discourse.

But by mocking the first lady of the United States, and not policies, Kimmel is showing a true lack of grace.