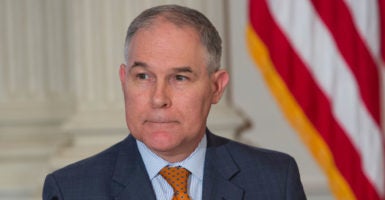 Pruitt, administrator of the Environmental Protection Agency, said the EPA and the National Highway Traffic Safety Administration would begin crafting new greenhouse gas emission and mileage standards for vehicles built in 2022 through 2025.

“The Obama EPA’s determination was wrong,” Pruitt said in a written statement about the Corporate Average Fuel Economy, or CAFE, standards. He said:

Obama’s EPA cut the midterm evaluation process short with politically charged expediency, made assumptions about the standards that didn’t comport with reality, and set the standards too high.

The EPA’s revising of the Corporate Average Fuel Economy regulations put the agency on a collision course with California state officials. The Golden State got permissions from the Obama administration to issue its own, higher emissions standards.

Conservative groups have urged Pruitt to repeal California’s waiver, arguing the state can use its influence over automakers to supplant federal standards. The EPA is still examining California’s waiver, but Pruitt seemed critical of continuing the policy as it stands.

“Cooperative federalism doesn’t mean that one state can dictate standards for the rest of the country,” Pruitt said. “EPA will set a national standard for greenhouse gas emissions that allows auto manufacturers to make cars that people both want and can afford—while still expanding environmental and safety benefits of newer cars.”

“It’s in everyone’s best interest to have a national standard, and we look forward to working with all states, including California, as we work to finalize that standard,” he said.

The EPA also is moving against former President Barack Obama’s emissions pledge under the Paris climate accord, which he joined in 2016. Obama committed the U.S. to cut greenhouse gas emissions 26 to 28 percent by 2025.

The Obama rules required cars to get 54.5 miles per gallon by 2025. Officials estimated the rules would cut 540 million metric tons of carbon dioxide emissions and save consumers money.

However, automakers missed fuel efficiency targets for model year 2016 cars and light trucks by about 9 grams per mile. The Obama EPA’s own analysis found cars may not meet the 2025 target, likely getting between 50 and 52.6 miles per gallon by then.