Right Side of History: The Second Amendment and American Gun Culture 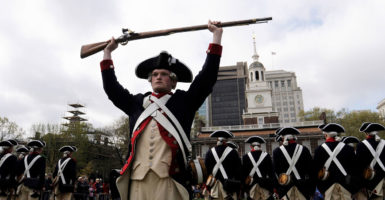 Guns were a critical part of American culture even before the American Revolution. (Photo: Bastiaan Slabbers/Zuma Press/Newscom)

The history of guns, gun control, and the Second Amendment is the topic of this week’s episode of “The Right Side of History,” a podcast dedicated to exploring current events through a historical lens and busting left-wing myths about figures and events of America’s past.

This week, hosts Jarrett Stepman, a contributor to The Daily Signal, and Fred Lucas, The Daily Signal’s White House correspondent, talk about how some states enacted early forms of gun control to disenfranchise black Americans.

Joining Stepman and Lucas is David Harsanyi, a senior editor for The Federalist who is writing a book titled “First Freedom: A Ride Through America’s Enduring History With the Gun, From the Revolution to Today.”

Harsanyi recently wrote about calls to repeal the Second Amendment from retired Supreme Court Justice John Paul Stevens and others. While they have every right to try to repeal the law, he explained, opponents of the right to bear arms should stop distorting history to meet their ends.