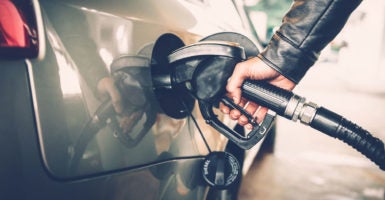 A recent ruling from a court in Leipzig, Germany, allows the cities of Stuttgart and Dusseldorf to ban older diesel-engine cars from sections of the cities. (Photo: CasarsaGuru/Getty Images)

Daniel Ziegler is a member of the Young Leaders Program at The Heritage Foundation.

The Federal Administrative Court of Leipzig’s recent ruling on diesel engines could spell economic pain for millions of drivers.

The court’s decision, which allows the German cities of Stuttgart and Dusseldorf to ban older diesel-engine cars from sections of the cities, could likely set a precedent for much of the European Union.

Quite bluntly, the Federation for German Consumer Organizations said, “The ruling is bad news for affected diesel drivers and owners of older petrol cars.”

The ruling would potentially force millions of Germans to abandon their current cars of choice. Only 2.7 million of the 15 million passenger cars in Germany adhere to Euro-6 standards the Leipzig ruling requires.

It also places an unfair burden on German car manufacturers, who will be saddled with refurbishing old diesel-burning cars that do not meet the new standards. Automakers will pass those costs onto the consumers.

The Leipzig court thinks it can stimulate the innovative process by limiting the use of the diesel engine. The Federal Administrative Court of Leipzig’s ruling seeks to accelerate the normal process of discovery and innovation.

Leipzig’s high court has taken a new approach to the saying, “Necessity is the mother of invention.”

The new burden placed upon the already faltering German diesel automotive industry will harm it, rather than strengthen it.

The BBC found that “[t]he market share for diesel vehicles in Germany fell from 48 percent in 2015 to around 39 percent last year.” The Independent echoed this, reporting that “diesel cars are on the way out.”

German car companies will be held back from investigating new engines and fuels by the unreasonable expectation that they refurbish the old while developing the new. The Leipzig court seems to think that they can do both.

When innovation happens organically, the process creates tremendous benefits for entrepreneurs, consumers, and the economy at large. However, when forced by governments through mandates and regulations, it does far more harm than good.

Sure, regulations will create some jobs to invest in whatever new standards the industry must meet. But every dollar spent on compliance diverts labor, capital, and materials from the private sector that could be used more efficiently to create even more jobs.

Resources that could be devoted to investing in new technologies or hiring new engineers are instead spent meeting politicians’ demands.

German Chancellor Angela Merkel hurried to downplay the decision’s importance, insisting that the ban only applied to “individual cities.” She was contradicted by the chief executive of ClientEarth, James Thornton, who declared the day a “huge win for the people and a clear example of courts stepping in where government action is found wanting.”

Leipzig’s ruling may only affect a few cities, and indeed only a few zones within each city for now, but its ripple will grow to affect other cities and nations.

By trying to stimulate innovation, the Leipzig court has only succeeded in hurting millions of drivers and allocating resources away from the innovative process.

This is not to say that industries should get a free pass to pollute; however, judicially banning certain kinds of vehicles results in unhelpful, obstructive mandates that may have minimal impacts on reducing emissions.

Encourage innovation through free markets. Don’t mandate it from the courts.