In Talk to Millennials, Trump Pledges Phase 2 of Tax Cuts 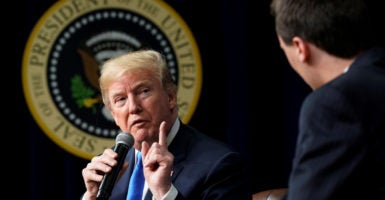 “The word ‘crumbs’ is going to be like the word ‘deplorable,’” @RealDonaldTrump says.

After passage of the Tax Cuts and Jobs Act, more than 4 million Americans received a pay hike, Trump said, comparing House Minority Leader Nancy Pelosi’s disparaging comments about the results to ill-chosen words by Hillary Clinton, his vanquished rival in the 2016 presidential election.

“We are going to get a phase two tax cut because it worked so well. Nobody thought it would be like this,” Trump said in an interview with Turning Point USA’s Charlie Kirk during the White House’s “Generation Next” conference addressing issues concerning millennials.

“The word ‘crumbs’ is going to be like the word ‘deplorable,’” the president said.

The line drew laughter and applause from the mostly young audience.

During the presidential campaign, Democratic nominee Clinton described supporters of Republican nominee Trump as a “basket of deplorables.”

Earlier this year, Pelosi described as “crumbs” the $1,000 bonuses made possible by the tax cuts. Hundreds of companies awarded such bonuses to employees because of their savings.

Trump said he had spoken with Rep. Kevin Brady, R-Texas, chairman of the House Ways and Means Committee, about following up on the tax cuts.

Kirk replied that $1,000 “is not crumbs to the young people in this room.”

Millennials are those born between 1982 and 2000, who number 83.1 million and represent more than a quarter of the nation’s population, according to the U.S. Census Bureau.

“Millennials starting out, you have a tremendous advantage now over what you had [before tax relief],” Trump said. “You’ve already paid less taxes. You have a lot more incentive. You’re going to have a lot more money left in your paycheck to spend.”

Passage of the Tax Cuts and Jobs Act meant that Americans ages 24 to 34 who earn the median income for their generation, $40,456, dropped from the 25 percent tax bracket to the 22 percent bracket, with an average annual tax savings of $1,200, according to the Bureau of Labor Statistics.

Kirk asked Trump what advice he would give a 25-year-old Donald Trump.

“Don’t run for president,” the president quipped, to laughter from the crowd.

The president contrasted the positive press he received as a celebrity before he ran for president and won the White House. The media’s approval rating, he said, is “down the tubes.”

When Kirk raised the issue of free speech on college campuses, Trump said his support among college students is much higher than is reflected in polls.

Trump said that on many college campuses, the “vast majority” supports his agenda:

You can call it conservative, you can call it whatever you want. There are people who want free speech,. When you look at what’s going on with free speech, the super left, with Antifa, all these characters, they get a lot of publicity. But you go to real campuses, go all over the country, go to the Midwest, even the coasts in many cases, I would say we have a majority support.

Many of his supporters “just don’t want to talk about it,” the president said.

The president went on to offer his own analysis of how to draw a more accurate assessment of his poll numbers.

“It’s sort of an interesting thing,” he said. “Sometimes they say, you add nine [percentage points]. Whatever Trump’s poll numbers, add nine. People don’t want to talk about it. They don’t want to be bothered. But when they get into the voting booth, they say vote Trump.”