These States Would Pay Most Under Biden’s New Business Tax

CNN Cancels Interview With a Conservative Student Voice on Guns 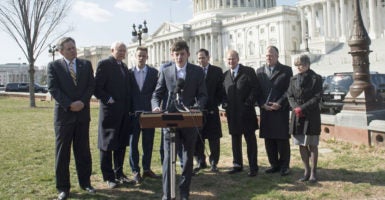 Kashuv, 16, has separated himself from the rest of the Parkland student advocates in his strong support for the Second Amendment and alternative safety proposals besides gun control or the banning of specific types of weapons.

In a tweet Wednesday morning, Kashuv accused CNN of canceling his appearance because he linked an article that was critical of Baldwin, host of “CNN Newsroom with Brooke Baldwin.” He also said he was excited to appear on her show.

Can't wait to be on Brooke's show tomorrow! https://t.co/LY9L2tuS96

Kashuv accused CNN in a subsequent tweet of using the article as an excuse to avoid having an even-sided discussion of gun control.

My friend just got a call from @CNN. They're canceling my interview because I quote RTed a Tweet where @ClayTravis called @BrookeBCNN a "fake news hypocrite" (and was quoted in the title).

But don't worry, CNN really wants to have the other side on, as long as they're complicit https://t.co/t95zexPiF8

Kashuv confirmed the cancellation with The Daily Caller News Foundation and said he has yet to hear back from the network.

A spokeswoman for CNN did not offer a comment.