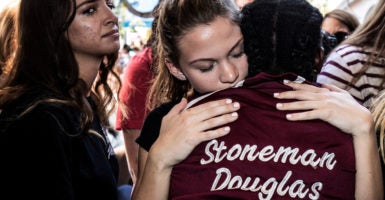 Students from Marjory Stoneman Douglas High School attend a memorial Feb. 15 after the shooting the day before at the school in Parkland, Florida, that left 17 dead and 17 wounded. (Photo: Thom Baur/Reuters/Newscom)

Although he dislikes the term “survivor” because he was elsewhere in the building and didn’t witness the shooting firsthand, Kyle Kashuv was at Marjory Stoneman Douglas High School when a 19-year-old with a rifle fatally shot 17 and wounded 17 more.

Veterans are trained, and many are currently unemployed, so hiring them to protect schools would “solve two main issues in our society,” Kashuv, 16, said Monday on “The Larry O’Connor Show” on WMAL radio in Washington.

“Why shouldn’t they have an opportunity to do so?” he asked.

Kashuv, a junior, met with President Donald Trump, first lady Melania Trump, Sen. Marco Rubio, R-Fla., and multiple other members of Congress during a trip this week to the nation’s capital.

Reliving the moment I met @FLOTUS and then @FLOTUS telling me "I'm going to walk you out" and somehow getting lost and winding up in the west wing and somehow into the Oval Office to meet @POTUS @realDonaldTrump never gets old. THANK YOU https://t.co/Fmal4YIGrh

Kashuv says he is creating an app for moms, and possibly school counselors, to help connect his peers with the emotional support they need.

“We definitely understand we have a lacking in the department for emotional support at our schools,” Kashuv said on Fox Business’ “Mornings with Maria” program Feb. 28. The program is hosted by Maria Bartiromo.

What the app does is match users based on shared interests and connects them to each other. The app attempts to help students get emotional support after a traumatic incident. Once they’re comfortable, they can meet on campus.

Kashuv didn’t grow up around guns, and his family never owned any, he told O’Connor. But when his peers say that “banning automatic weapons” is a solution to mass shootings, he corrects them.

“They’ve been banned for a long time,” he says.

Was so great meeting @FLOTUS and @POTUS @realDonaldTrump. They're true Patriots. Thank you @KellyannePolls, I owe you the world. pic.twitter.com/J3fhJfGeH6

Kashuv told former Rep. Jason Chaffetz, R-Utah, also appearing on “Mornings with Maria,” that he doesn’t think violent video games have an effect, “even slightly,” on his peers.

“We can clearly tell reality from video games, and there’s a clear divide,” he said.

Kashuv also took a swing at the mainstream media, telling O’Connor, “This entire tragedy has become a media show.”

“A lot of the media, they’re unemotional, and they don’t care anymore about the tragedy,” only about ratings, he said.

As Americans, we need to be decisive not divisive.

This report was updated to include Kashuv’s meetings and tweets in Washington.