3 Major Problems Conservatives Have With the Government Spending Bill 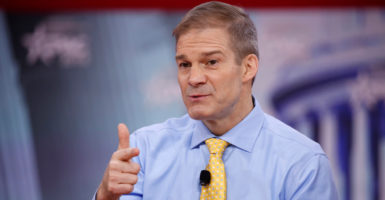 “I think it's not good for the American taxpayer and not … in any way close to consistent with what we said we would do when they elected us,” Rep. Jim Jordan, R-Ohio, says. (Photo: Joshua Roberts/Reuters /Newscom)

Major conservative priorities have gone missing in the spending bill to fund the government through September, House lawmakers say.

Rep. Mark Meadows, R-N.C., chairman of the House Freedom Caucus, spelled out the worry Wednesday during Conversations with Conservatives, a monthly meeting with reporters hosted by conservative lawmakers and The Heritage Foundation.

Government funding runs out Friday at midnight, and House Speaker Paul Ryan, R-Wis., hopes for a vote on the omnibus spending bill Thursday.

Although the $1.3 trillion bill includes funding such as a $3 billion increase to counter the opioid drug crisis, a $10 billion increase for infrastructure, and $1.57 billion more for border security, it fails to address major conservative priorities, Meadows and others said. Among them:

The spending bill includes funding for Planned Parenthood, which conservatives had hoped would be stripped. It’s a major reason that Rep. Jim Jordan, R-Ohio, said he would vote no.

“I am voting against it, as you already know … and if the bill passes the way it is, I would hope the White House does veto it,” Jordan said.

“I don’t know if they will, it’s been a long process so they may not, but I think it’s not good for the American taxpayer and not consistent with, in any way close to consistent with, what we said we would do when they elected us.”

The bill so far contains an earmark of about $900 million for the “Gateway project,” a rail and tunnel improvement between New York and New Jersey, as The Daily Signal previously reported. Lawmakers in recent years have said they no longer would commit funds to pet regional projects such as this.

“[The] Gateway project gets money, the American taxpayers get a $20 trillion deficit and no money for the [border] wall,” Jordan said.

The bill includes $1.6 billion for physical barriers and related technology at the U.S.-Mexico border, as NBC reported. But, Meadows said, that is not enough to begin significant construction of President Donald Trump’s  promised border wall.

“It appears that at best it is going to be a $1.6 billion initiative for border security, which means that there is really no wall funding,” Meadows said. “They will try to spin it as there is wall funding, but the $1.6 billion has been in there for some time.”

“It is troubling when we get a tunnel and we don’t get a wall,” he said, “and the last time I checked, the president didn’t make any promises [about] getting a tunnel at his campaign stops, at least not in North Carolina.”