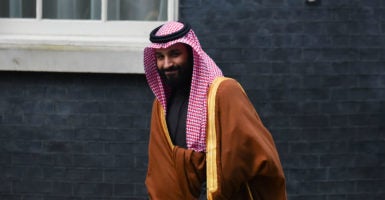 Saudi Crown Prince Mohammed bin Salman is visiting the U.S. this week, and one issue on his agenda will be to continue discussing collaboration with the U.S. to develop a nuclear power sector.

Likely timed to send a message during his visit to America, a subcommittee of the House Foreign Affairs Committee scheduled a hearing for Wednesday on “Implications of a U.S.-Saudi Arabia Nuclear Cooperation Agreement for the Middle East.”

In order for U.S. companies to fully participate in Saudi Arabia’s nascent nuclear power sector, a nuclear trade agreement (known as a “123 agreement”) must be signed. Such an agreement establishes nonproliferation conditions for any country using U.S.-based technology and fuel, and sets up a potential trade relationship in alignment with those conditions.

The U.S. has entered into this kind of agreement with 48 countries and the International Atomic Energy Agency. Once an agreement is finalized, trade by U.S. nuclear companies is regulated by the departments of Energy, Commerce, and State.

Events have moved quickly since last fall when Saudi Arabia issued a request for information and proposals for an initial two reactors by companies in Russia, China, South Korea, France, and the U.S.

Saudi Arabia does not have an established civilian nuclear power sector. In the last 15 years, however, it has set ambitious goals for a domestic nuclear energy program.

The Saudis have partnered with countries around the world to develop the regulatory and commercial foundations of such a commercial nuclear sector. Among them are Finland, France, South Korea, Australia, Jordan, China, Russia, and Kazakhstan.

By all appearances, Saudi Arabia is pursuing a legitimate, robust, and peaceful nuclear power industry that is matched by its continued participation in international nonproliferation treaties. Saudi Arabia signed the Non-Proliferation Treaty in 1988 and concluded a comprehensive safeguards agreement in 2009, giving the International Atomic Energy Agency access to its nuclear program and facilities.

Additionally, Saudi Arabia is party to the Global Initiative to Combat Nuclear Terrorism and the Proliferation Security Initiative, agreements focused on monitoring the transportation of radioactive material, information sharing between countries, and detection and prevention of trafficking nuclear weapons.

Some have argued that an essential piece to a 123 agreement with Saudi Arabia is the so-called “gold standard,” which would require a ban on enrichment and reprocessing technologies as a condition of trading with the U.S. They argue this is critical to preventing further proliferation of nuclear weapons in the Middle East and acceleration of Iran’s nuclear weapons program.

There are a number of problems with the so-called “gold standard.” To take just one, a “gold standard” misleadingly implies that any other standard is deficient or ineffectual.

In fixating on this misleadingly-named “gold standard,” advocates are missing the major gains that could be made by engaging with Saudi Arabia’s nuclear program through a 123 agreement. In fact, the “gold standard” itself may be a detriment to advancing America’s nonproliferation goals if it causes potential partnering nations to minimize or reject trade with the U.S.

The U.S. has a unique opportunity to engage with Saudi Arabia and help guide its peaceful introduction of commercial nuclear power, to which a 123 agreement is the doorway.

The U.S. should encourage and contribute to the responsible use of nuclear power technology by promptly completing negotiations with Saudi Arabia.