Mike Pompeo Is an Excellent Choice for Secretary of State 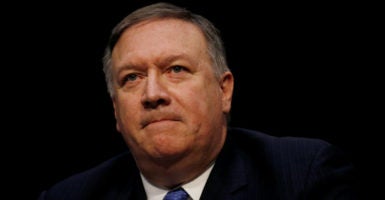 Mike Pompeo has served as CIA director since January 2017 and previously served three terms in the House of Representatives. (Photo: Leah Millis/Reuters /Newscom)

The announcement of Mike Pompeo as the next secretary of state, subject to Senate confirmation, sends a firm signal that the Trump presidency is committed to ensuring robust U.S. leadership on the world stage.

Pompeo is a very strong pick for the position, replacing Rex Tillerson at Foggy Bottom. He has done an outstanding job as CIA director, and has been a key figure in driving the administration’s successful strategy in defeating the Islamic State threat in Iraq and Syria, reducing the terrorist group to just 2 percent of its territory in the region.

In addition, he has extensive experience working with lawmakers on Capitol Hill, having served three terms in Congress, where he served as a member of the House intelligence committee.

Pompeo is well positioned to drive U.S. foreign policy at a time when the world’s superpower faces an array of global challenges, ranging from the specter of a nuclear-armed Iran to the rising menace posed by Vladimir Putin’s Russia. His priorities must be to strengthen America’s alliances, confront key adversaries that include state-based actors and Islamist terror networks, and reassure America’s friends that the United States stands with them.

Like President Donald Trump, Pompeo has been highly skeptical of the deeply flawed and extremely weak Iran nuclear deal signed by the Obama administration, known as the Joint Comprehensive Plan of Action. He will be instrumental in efforts to rally America’s partners in Europe to strengthen the deal. If European allies are unwilling to do so, Trump has made it clear he will withdraw from the agreement in May.

Pompeo will also oversee the Trump administration’s big picture strategy to rein in Iran. That strategy confronts Tehran’s development of long-range ballistic missiles, its support for terrorism through Hamas and Hezbollah, and its suppression of human rights.

As secretary of state, Pompeo will play a key role in shaping America’s overall response to Moscow, which will include strengthening sanctions, bolstering of the U.S. military presence in Europe through the NATO alliance, and supporting Ukraine in its war against Russian forces. In addition, he will oversee the U.S. response to the Russian regime’s barbaric use of chemical weapons on British soil—a direct assault on British sovereignty.

In Asia, Pompeo will play a pivotal role in forthcoming negotiations with North Korea over ending its nuclear weapons program, as well as challenging growing Chinese hegemony in the Far East.

In the Middle East, he will be tasked with overseeing the U.S. response to the Assad dictatorship’s continuing mass killing of civilians in rebel-held areas, and in making sure the United States resists both Iranian and Russian attempts to assert a long-term foothold in that war-ravaged country.

Pompeo’s portfolio will also include the ongoing global war against Islamist terrorism in the form of both ISIS and al-Qaeda. That war exists on multiple fronts, including in North Africa, East Africa, South Asia, and Afghanistan, and even reaches the streets of many major European cities, from Brussels and Paris to London and Berlin.

Pompeo will lead the State Department at a crucial time for American leadership. He brings with him both extensive executive branch and congressional experience, as well as a close working relationship with the president.

His clear-eyed understanding of the threats America faces today, as well as his firm commitment to U.S. alliances, make him an excellent choice for the post.