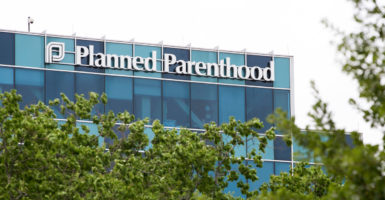 Despite piles of evidence that Planned Parenthood was illegally selling baby body parts, a new report shows the wrongdoing hasn't made the slightest dent in its taxpayer-funded gravy train. (Photo: Kris Tripplaar/Sipa USA/Newscom)

Breaking the law doesn’t help your chances for earning federal dollars—but apparently, it doesn’t hurt them either. If there’s one thing Planned Parenthood’s learned over the last few years, it’s that crime does pay. A lot, according to the Government Accountability Office.

Despite piles of evidence (some of it from the group’s own mouth) that Cecile Richards’ group was illegally selling baby body parts (after performing equally illegal late-term abortions), a new report shows the wrongdoing hasn’t made the slightest dent in its taxpayer-funded gravy train—at least on the federal level.

On the contrary, GAO officials found, being referred for criminal prosecution didn’t result in so much as a financial blip for Richards and company. Between 2013 and 2015, Planned Parenthood, its international affiliates, and Marie Stopes International dug deep into taxpayers’ pockets, banking a whopping $1.5 billion from federal and state programs like Medicaid, Medicare, Title X, and the Children’s Health Insurance Program.

Even more amazingly, four of the five Planned Parenthood locations that raked in the most money are the same ones under investigation by the FBI. Planned Parenthood offices in Mar Monte ($229 million), Los Angeles ($106 million), the Pacific Southwest ($105 million), and Northern California ($104 million).

The news disgusted a number of House conservatives, many of whom were part of the select panel a couple of years later that referred the organization to the Justice Department. Obviously, it’s offensive that taxpayers are forced to fund anyone that performs abortion—but we certainly shouldn’t fund the groups who break the law doing it. Live Action President Lila Rose can’t understand why Democrats don’t agree.

This should not be a partisan issue. Even those politicians who support abortion should be honest enough to admit that taxpayers shouldn’t be funding an organization embroiled in such barbaric and likely criminal acts—especially when there are federally-qualified health centers where the money could be redirected to help more people. DaVinci Biosciences, one of Planned Parenthood’s partners in the baby organ trade, has already admitted to breaking federal law.

Rep. Diane Black, R-Tenn., who, along with Rep. Marsha Blackburn, R-Tenn., has been leading the fight to defund Planned Parenthood, is absolutely sickened by this betrayal of taxpayers’ trust.

“Industry giants like Planned Parenthood perform more than 320,000 abortions every year, and this GAO report exposes that these atrocities are done at the expense of taxpayers. … Abortion is not family planning,” she added. “Abortion is family destruction, and the fact that $1.5 billion in taxpayer dollars is funneled to this industry is sickening. The American people deserve better.”

Most agree. Only 36 percent of the country thinks taxpayers should be forced to foot the bill for abortion. But I’m willing to bet that even they wouldn’t approve of sending that money to an organization that’s believed to have broken a long list of federal and state laws.

As for Republicans, 120 asked GAO to run the numbers. This report ought to light another fire under Congress to ramp up its push to defund Planned Parenthood. If Democrats want to stop the GOP, let them stand in front of voters and own it.

President Donald Trump has done what he can internationally and through executive order. He needs the House and Senate to do the rest.