An Opportunity for Real Reform at DHS 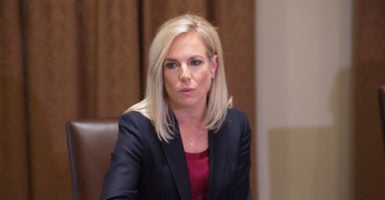 There’s new potential for reform at the Department of Homeland Security.

On Wednesday, the Senate Homeland Security and Governmental Affairs Committee passed its version of a Department of Homeland Security reauthorization bill that was passed by the House last year. This could be the first time DHS will be reauthorized since its creation—and it also creates a chance to reform the department in several key ways.

For instance, a reauthorization bill can address the major problem of DHS’ current management structure. Weaknesses and divisions in the current structure prohibit management from effectively doing its job.

Currently, each of the department’s agencies have their own congressional outreach offices. This greatly weakens DHS’ ability to advance its priorities because the organization isn’t working as a whole. The same is true for other support functions such as general counsels and chief information officers. To remedy this, these support offices should be streamlined and more authority should be given to the DHS-wide office. This will allow DHS to work as a cohesive whole.

To further strengthen DHS, the myriad of different DHS headquarter offices should be consolidated to reduce the number of direct reports to the secretary and to improve DHS operations.

The House bill addressed this problem by creating the Office of External Affairs.  Led by a principle assistant secretary, this office would consolidate the current offices of Legislative Affairs, Partnership and Engagement, and Public Affairs. It would be wise for the Senate to take such an approach as well. Furthermore, both chambers should consider merging the Office of Civil Liberties and the Office of Privacy.

There are a host of other ways in which DHS can be reorganized or reformed. Four target areas that Congress should focus on include:

To function at its full potential, DHS needs reform. Congress now has the chance to use the reauthorization process to enhance the effectiveness of the department. Letting this opportunity go to waste would be a mistake.