Curtain Call for the Aircraft That Helped Eliminate Terrorists 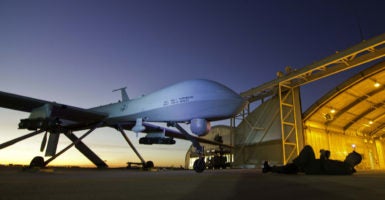 March 9 marks the end of an incredible run for one of the most ground-breaking and successful aircraft ever to take to the sky. It is the day when the United States Air Force will fly the last combat sortie for the iconic unmanned aircraft system known as the MQ-1 Predator somewhere in the Middle East.

While I never had the opportunity to fly the Predator during my time in the Air Force, the event does bring back an incredible memory.

On the afternoon of Feb. 16, 2001, I was invited into a room filled with other leaders at Nellis Air Force Base in Nevada to bear witness to a moment that would forever change the trajectory of American airpower.

We all watched as a General Atomics Predator flew across the TV screen and we listened as its pilot audibly described the events that would follow. A split second later, a Hellfire missile, the first ever launched by a unmanned aircraft system in flight, streaked from beneath its wing to hit a target a few miles away. It was a shot heard around the world.

From the Predator’s first flight in 1994, the pressure to get it into the fight and keep it there has been constant. By 2001, the Air Force had acquired some 60 RQ-1 (reconnaissance only) systems, but that first missile shot, coupled with the terrorist attacks on 9/11, transformed the Predator into a capability that combatant commanders across the globe came to view as essential for their operations.

The subsequent demand forced an adolescent system to the front lines while General Atomics scrambled to move MQ-1 production into overdrive. Forgoing the normal gauntlet associated with the full Defense Department acquisition process was both a blessing and a curse. The troops received the Predator quickly, but the system lacked the refinements and debugging a full test and evaluation program would have delivered. Operators in the field and the company that stood behind them would have to overcome that burden and subsequent issues.

The learning curve for both the Air Force and General Atomics was steep, with the latter stepping in to re-engineer everything from aspects of the airframe to the pilot and sensor operator controls to ease the workload associated with employment. Together that team has allowed Predator aircraft to fly more than 136,000 sorties supporting missions as diverse as close air support, convoy and raid over watch, and high-value target development.

Its intelligence, surveillance, and reconnaissance attributes, coupled with its loiter time, made it a standout for collection, but the kinetic effects it brought to bear for Americans on the battlefield are something for the record books. Predator aircraft have flown more than 2 million hours and fired countless Hellfire missiles in support of the war on terror. That pairing is likely responsible for the elimination of more terrorists than any other system in the air today—manned or unmanned—which makes March 9 a day to celebrate.

At the end of an aircraft, pilot, or aircrew member’s flying career, something special happens. As the jet taxies to the chalks for the last time, fire engines shoot streams of water over its approach to “hose down” the aircraft. And when the canopy goes up, and the crew members climb down from the cockpit for the last time, squadron mates do the same thing with them.

It’s a rite of passage that dates back to the earliest days of fighter aviation and, while the tradition will continue with the Predator’s last Air Force combat mission, it will come with a twist.

After it touches down, the last Air Force MQ-1 will taxi to the chalks at a remote airfield somewhere in the Middle East, while the aircrew will step down from a ground control station some 8,000 miles away at Creech Air Force Base in Nevada. Both will receive the hose down that tradition begs, while they look back on an incredible ride and realize they fought the good fight, finished the course, and kept the faith of and for their brothers in arms.