Women in Iran Are Standing Up to Oppressive Policies 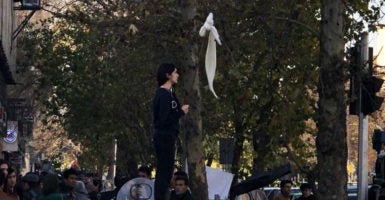 On March 8, the world will recognize International Women’s Day. This year, the campaign hopes to highlight global gender inequalities and advocate change under the slogan “Press for Progress.”

Women across the globe face unique challenges to obtaining the same rights and privileges as their male counterparts. Recent protests over compulsory hijab laws in Iran remind us all why International Women’s Day is important.

In December 2017, protests broke out across Iran over the negligence of government officials and the failing Iranian economy. However, the protests quickly gave way to a public outcry over gender discrimination laws. One woman in particular caught international attention when she stood on a street corner waving her hijab over her head.

Whether a woman wants to wear a hijab should be her personal decision. However, Iranian religious law has dictated female dress code in public since the Iranian Revolution in 1979.

Under this law, all women and girls over the age of 9 are required to wear a hijab in public. For any woman to remove her hijab in the public square is a crime and puts her at risk of incarceration in some of Iran’s most notorious prisons.

However, rather than be intimidated, this woman set off a wave of hijab protests.

Now, women across Iran are risking their lives to protest compulsory hijab laws. Within the last week, police pulled a hijab-less woman from a telephone cable box, causing her injuries. Videos of the incident made their rounds on social media and incited further protests.

Amnesty International reports that dozens of Iranian women are currently at risk of long jail terms for protesting compulsory hijabs. At least 35 have been arrested in Tehran alone, with several reportedly subjected to torture while in prison.

In an official statement, the Iranian police warned women that if they continue removing their hijabs in protest, they would be charged with inciting corruption and prostitution—a crime that carries a hefty jail sentence.

Compulsory hijab laws are not the only challenge that Iranian women face. Just last month, the Iranian state television ran a program calling for victims of domestic abuse to “kiss their husband’s feet.” A ban on women in sports stadiums led to at least 35 women being arrested for attempting to attend a soccer match.

A woman cannot get married without the consent of her male guardian. Married women cannot leave the country without their husband’s permission. Even Iran’s supreme leader, Ayatollah Ali Khamenei, has described the idea of gender equality as unacceptable for society.

Despite the dire human rights situation and potential backlash from governmental authorities, the women of Iran are demanding change. The Iranian government released a report stating that the majority of Iranians disagree with compulsory hijab laws.

More women are protesting despite more arrests being made. Iranians have even taken to social media to protest compulsory hijab laws and the bans on women attending sporting events.

On this International Women’s Day, the world will reflect on the progress women have made and the challenges they still face. As we celebrate this day, do not forget the women of Iran and the sacrifice they are making to fight for women’s rights.