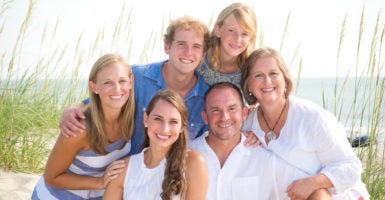 “If we had had an educational savings account ... to pay for our homeschool supplies, or extracurricular classes, or tutoring for our kids, that would have been phenomenal," Melinda Bargery says, pictured with husband Chris Bargery and children Sarah, Haley, Jackson, and Mary Margaret. (Photo courtesy of Melinda Bargery)

The spouse of a retired Air Force colonel says a bill creating federally funded savings accounts for military families would provide more school choices and flexibility in educating the children of those in the armed forces.

“It absolutely would give them the freedom to make the educational choices that they need to make for their particular family members,” Melinda Bargery, a mother of four and wife of Col. Chris Bargery, who served in the Air Force for more than 28 years, told The Daily Signal in a phone interview.

The bill, introduced Wednesday by Rep. Jim Banks, R-Ind., would create a new kind of education savings account that military families could use to increase their school choice options by paying for certain costs.

Options covered would include private school tuition, private online learning programs, individual classes and extracurriculars at public schools, computer hardware, textbooks, curriculum, and other instructional materials, according to a report from The Heritage Foundation, which has championed the idea.

“Thirty-five percent of service members have considered leaving the military because of the limited education options available, and 40 percent have either declined or would decline a career-advancing opportunity at a different installation if it meant their child would have to leave a high-performing school,” Banks wrote in an op-ed that appeared Wednesday in The Wall Street Journal.

Bargery, a resident of Mount Vernon, Virginia, says she homeschooled each of the couple’s four children “at one point along the way.”

She said she knows from experience that military education savings accounts would provide needed flexibility for military families, which often are on the move.

“If we had had an educational savings account where we could have drawn from that to pay for our homeschool supplies, or extracurricular classes, or tutoring for our kids, that would have been phenomenal,” Bargery said.

The family made 21 moves during her husband’s 14 different assignments, she said.

During son Jackson’s senior year at Ramstein High School, a Department of Defense school in Germany, school officials said he would not be able to graduate since he had not met all of the school’s requirements.

“They wanted him to take all these classes that were not going to help him in any sort of way, but just to fulfill their requirements,” Bargery said. “And eventually, after much, much discussion and frustration, we found out that he could be allowed to graduate essentially from the school that he had previously been in, with their requirements.”

Had the family been able to use a program such as education savings accounts, Bargery said, they might not have had the issue to begin with.

“It just took so much of our time, and we thought we were going to have to put him in classes like ‘Dress for Success’ rather than an AP [Advanced Placement] psych class or something like that,” she said. “So you just run up against situations like that over and over.”

Bargery said military families would be able to give their children more consistency if they were able to access “great online academies” and other choices through education savings accounts.

The quality of education also would increase if military families had the funds and ability to choose a school for their children, rather than being confined to a school on base.

“Oftentimes the schools that are zoned for military bases are subpar, or don’t offer the services that your kids might need,” Bargery said. “Having that money given straight to us, instead of going to the school district, would be amazing because we could just choose how we wanted to do that along the way.”

Sometimes military families decide not to live on a base because of the quality of the school or schools there.

“I have noticed over the years that people less and less chose to live on base, and oftentimes it was because the school that was zoned for the base was so poor,” Bargery said, adding: “They wanted better for their children, so they would be willing to live further out, away from the base, just to give their kids a better education.”

“I hope it passes,” she said of the legislation.