Schools Safer Now Than They Were in 1990s, According to New Study 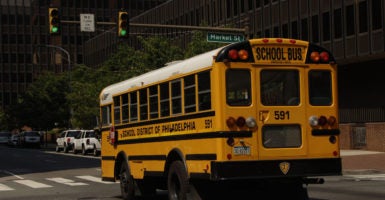 “The thing to remember is that these are extremely rare events, and no matter what you can come up with to prevent it, the shooter will have a workaround,” a professor at Northeastern University says of school shootings. (Photo: Album/Prisma/Newscom)

According to a new study, school shootings have declined since the early 1990s.

“There is not an epidemic of school shootings,” said James Alan Fox, a professor of criminology, law, and public policy at Northeastern University.

“The thing to remember is that these are extremely rare events, and no matter what you can come up with to prevent it, the shooter will have a workaround,” Fox also said.

“The Three R’s of School Shootings: Risk, Readiness, and Response” is a new study that dives into the numbers of mass shootings at schools in the United States.

According to the Northeastern News write-up of study, “four times the number of children were killed in schools in the early 1990s than [are] today, Fox said.” Authors of the study suggested that school intruder drills, requiring ID cards for entry, and metal detectors have been largely ineffective.

As for metal detectors, a school shooter in Minnesota killed the guard at the entryway of the metal detector in 2005 and another shooter killed and injured children on a playground rather than entering the school in 1989. In 1998, two students pulled the fire alarm and shot students as they exited the school.

“You might have students in a very large school who are troubled but who are basically flying under the radar because you have one guidance counselor for 400 students,” she said.

“Notwithstanding the occasional multiple-fatality shooting that takes place at one of the 100,000 public schools across America, the nation’s schools are safe. Over the past quarter-century, on average about 10 students are slain in school shootings annually,” wrote Fox for USA Today earlier this month. “Compare the school fatality rate with the more than 100 school-age children accidentally killed each year riding their bikes or walking to school. ”

The data Fox and Fridel utilized came from the FBI, Gun Violence Archive, Congressional Research Service, and others.