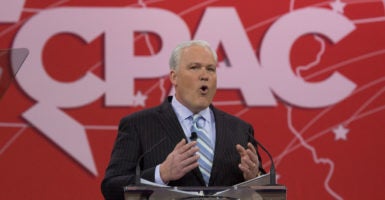 "Where we have the most gun control, we have the highest crime," CPAC Chairman Matt Schlapp says. (Photo: Jeff Malet Photography/Newscom)

“No. I actually think there’s a lot of people, including these victims’ families, who their heart is in the right place,” said Schlapp, chairman of the Conservative Political Action Conference, which winds up Saturday outside Washington. “The whole question of gun control feeds into this whole question of the bigger political fight. The left is in versus the right.”

Schlapp, also chairman of the American Conservative Union, added: “And I think that’s unfortunate. I think this is a time for us to listen more, for us to try to work together. I think what the president did at the White House with these families is the right next step.”

CNN’s Camerota brought up Wayne LaPierre, executive vice president of the National Rifle Association, and his speech to CPAC, the largest annual gathering of conservative activists, asking why LaPierre was “stoking division.”

“I don’t think he’s stoking that division. I think he’s defending the Second Amendment,” Schlapp responded. “It’s a cherished right, chiseled in our Constitution. It’s in the Bill of Rights. The Constitution would be nothing without our Bill of Rights and I think that’s an important thing for us to remember.”

Camerota pivoted back to the NRA’s LaPierre.

“I think if you understand the antecedent, it makes more sense,” Schlapp said, adding:

Camerota interrupted, noting that after the Sandy Hook Elementary massacre in Newtown, Connecticut, new gun control measures in that state were responsible for lowering the crime and homicide rates.

“It’s coming from Indiana where the gun control is lax. You know that,” the CNN host said.

“You’re blaming Indiana for the crimes in Chicago. That’s not fair,” Schlapp said. “[Chicago guns] come from the a criminal element that has their guns, even though they might be illegal to obtain.”