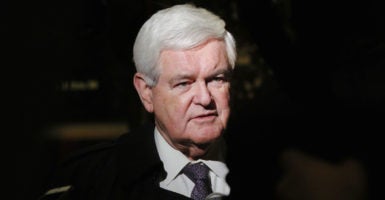 "If you have somebody who is just blatantly, obviously nuts, they shouldn’t be able to get a gun. This should not be a hard problem,” former House Speaker Newt Gingrich says.

Former Speaker of the House Newt Gingrich said America should begin arming schoolteachers and administrators to protect their students from mass shootings.

The first step is to arm people within the schools and give them a fighting chance, Gingrich said Tuesday on “Fox & Friends,” in response to a question on what can be done to stop the next mass shooter.

“Well, first of all, you’re not going to stop all of them, which is why I think we have to have some kind of armed defenders who are also schoolteachers or administrators in every school in the country,” the former Republican presidential candidate and  congressman from Georgia said.

“Second, I notice that President [Donald] Trump did strongly support what Sen. [John] Cornyn is trying to do. Sen. Cornyn does have a bill which expands the gun check. And I think most Americans would agree with that.”

“I mean, if you have somebody who is just blatantly, obviously nuts, they shouldn’t be able to get a gun. This should not be a hard problem.”