Congress Blew Through the Budget Caps, Again. Here’s What Needs to Change. 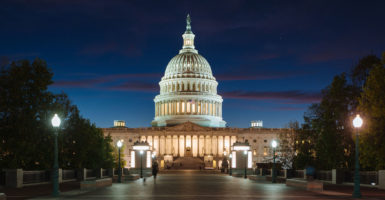 The budget deal reached last week raised spending caps by $296 billion, with only a third of that being paid for. (Photo: erick4x4/Getty Images)

Christian Andzel is a member of the Young Leaders Program at The Heritage Foundation.

This spending spree takes a Mack Truck and rams through the hard-fought budget caps under the 2011 Budget Control Act to the tune of at least $300 billion.

When all is said and done, the fiscal wreckage could be worse than that. With a federal debt already at $20.5 trillion, we have just lurched closer to fiscal insolvency.

Republicans touted that they got $1 of new military spending for every $1 of domestic social programs, but even that is wishful thinking at best. This calculation doesn’t include emergency disaster spending for hurricanes and fires, which was close to $90 billion. At least $21 billion of “defense” spending goes to the State Department instead, which does not fight wars.

In the end, the domestic agencies may wind up with $2 of added funding for every $1 for national security, which is hardly a good deal for taxpayers.

It also isn’t clear why the recovery efforts to pay for disaster relief should be paid for by the federal government.

In the wake of some of the worst disasters in American history—the hurricane that wiped out Galveston, Texas, the Great Chicago Fire, and the San Francisco earthquake, for example—the rebuilding of these cities happened swiftly and was almost all funded by private businesses, private charities, and state and local initiatives, not by Washington writing a big check.

And when, alas, the feds do write big checks for disasters, the money should come from across-the-board cuts of 2 or 3 percent from all the other federal agencies—not by running up the debt.

The Budget Control Act caps are now a victim of their own success. From 2011-2016, the spending caps held discretionary spending increases below the 2 percent level of inflation. For three years, federal spending actually fell, in no small part because of those caps.

But now those tight caps have been evaded four times in six years, and each time the overspending has been larger. The cork has been pulled off the champagne bottle.

The lack of spending restraint and the inability of Congress to keep its past legislative promises not only erodes trust in the political class, but shows a frightening and complete indifference by Washington toward our nation’s growing fiscal crisis.

The big question is, where do we go from here on the budget? With neither party at all committed to reducing debt and deficits, our worry is that the budget caps are, for all intents and purposes, gone forever.

The caps after 2020 are still technically in place, but the 2019 levels of spending are going to come in at as much as $200 billion above the 2020 caps. So either we see a massive cut in government spending in the election year of 2020, which would be a wonderful thing to behold—but is as likely as President Donald Trump and House Minority Leader Nancy Pelosi dancing a tango together—or, Congress throws the caps into the dustbin of history.

That’s a scary prospect, because it would mean that Congress would be budgeting without any fiscal guard rails or speed limits at all. This will only invite further bipartisan spending sprees that are against the interests of the American people.

The indefensible budget behavior of Congress over the last several weeks reinforces the case for Congress to extend the Budget Control Act caps into 2022 and beyond, since the caps expire at the end of 2021.

These future caps should be based on the 2011 Budget Control Act’s average annual spending growth rate, not the new budget’s enormous spending growth rate. Failure to extend the caps would be a total surrender and a green light to the already out-of-control Mack Truck.