See How Your Lawmakers Voted on the Budget Bill 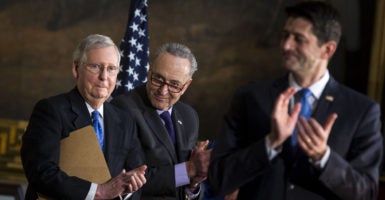 During a brief halt in government funding early Friday morning, the Senate voted 71-28 to pass a budget deal, pushed by Republican and Democrat leaders, that will raise caps on spending by $300 billion over two years.

Costs on non-military lines will never come down if we do not elect more Republicans in the 2018 Election, and beyond. This Bill is a BIG VICTORY for our Military, but much waste in order to get Dem votes. Fortunately, DACA not included in this Bill, negotiations to start now!

“I promised my constituents in western [North Carolina] that I would work to cut government spending,” Rep. Mark Meadows, R-N.C., chairman of the House Freedom Caucus, tweeted Friday morning. “This budget deal does the opposite—it expands government spending well beyond the caps, by almost 15 percent. We have to do better. Future generations depend on it.”

Tonight, you could feel the frustration and embarrassment growing in Congress as we exposed the hypocrisy of Republicans who are joining in an unholy alliance and spending free-for-all with Democrats at the expense of the American people and our party’s supposed principles.

The deal, which funds the government until March 23, raises spending caps set in the Budget Control Act by $296 billion, “with only a third of that being paid for,” according to a recent commentary by Justin Bogie, a senior policy analyst in fiscal affairs at The Heritage Foundation.

The Budget Control Act, passed in 2011, sought to curb government spending and control the growth of federal programs.

Senate Majority Leader Mitch McConnell, R-Ky., and Minority Leader Chuck Schumer, D-N.Y., both had pushed the budget deal on Twitter, as had Trump.

Here is a list of how U.S. senators voted on the spending deal: And here is the list of how members of the U.S. House voted: