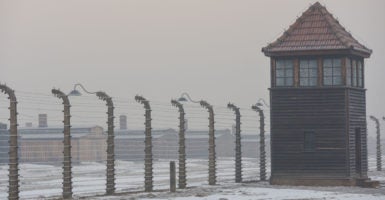 A Polish law would make it punishable with a fine to use terms such as “Polish death camps” when referring to concentration camps like Auschwitz, pictured, and Treblinka, which were located within Nazi-occupied Poland. (Photo: Omar Marques / Sopa Images/ZUMA Press/Newscom)

Any American who ever questions whether the First Amendment is vital to protect free speech should just cast a glance across the Atlantic. Europeans share the same values we do—indeed, our concept of rights derives from European philosophers—and yet they often adopt misguided laws that circumscribe freedom of expression.

The latest blunder comes courtesy of Poland, which is in the midst of passing one of the silliest laws ever devised. President Andrzej Duda signed a law Tuesday that makes it illegal to accuse Poland of complicity in Nazi crimes, including the Holocaust.

The law would also make it punishable with a fine to use terms such as “Polish death camps” when referring to concentration camps like Auschwitz and Treblinka, which were located within Nazi-occupied Poland. Former President Barack Obama deeply offended Poland when he used the term in 2012, and later apologized.

Like all these other laws, the intention is undoubtedly honorable. Poland takes extreme umbrage at being associated with the terror that was the Holocaust.

But Poland must understand that the way to fight misleading information is not to ban it, but to counter it with good information.

It is, moreover, perfectly legitimate to query the extent to which non-Germans collaborated with Nazi crimes in Poland, France, the rest of Europe, and in fact, the world. To attempt to chill that debate is ill-advised.

U.S. Secretary of State Rex Tillerson struck the right tone when he said the Polish law “adversely affects freedom of speech and academic inquiry.” Tillerson further added in a statement:

The United States reaffirms that terms like ‘Polish death camps’ are painful and misleading. Such historical inaccuracies affect Poland, our strong ally, and must be combatted in ways that protect fundamental freedoms. We believe that open debate, scholarship, and education are the best means of countering misleading speech.

Poland is but the latest European country to ban freedom of expression it finds uncomfortable. Many of these speech codes and laws have to do with the trauma of the Nazi legacy, but others extend far beyond.

In the United Kingdom, for example, the Public Order Act 1986 prohibits the “expressions of racial hatred, which is defined as hatred against a group of persons by reason of the group’s colour, race, nationality (including citizenship) or ethnic or national origins.”

People have been fined and jailed both for expressing religious objections to the gay lifestyle or, at the other end, for displaying anti-religious bigotry.

In Germany, Holocaust denial is punishable by law. New hate speech rules, known locally as NetzDG and which came into full force last month, demand that social media giants promptly remove potentially illegal material, some of it within 24 hours of being notified, or face fines.

And France in 1990 passed a law that also made it a crime to deny the Holocaust.

We perfectly understand frustration with Holocaust deniers, but the best way to deal with them, as Tillerson said, is with robust rebuttals, not to drive them underground, where conspiracy theorists and fantasists have always thrived.

The Polish government has received plaudits from American conservatives for standing up to attempts by the European Union to infringe on Polish sovereignty, and by striking its own course. Erecting anti-speech codes—even when it’s hateful speech—is not the way to start copying West Europeans.