To Offer Americans an Alternative to ‘Single-Payer’ Health Care, Republicans Must Act This Year 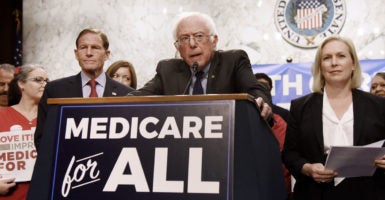 The Democrats are pushing for Universal HealthCare while thousands of people are marching in the UK because their U system is going broke and not working. Dems want to greatly raise taxes for really bad and non-personal medical care. No thanks!

Trump’s basic message is right on target. Of course, nobody expects anybody’s tweets to rise to the level of policy analysis, but expect the usual gaggle of the president’s critics to nit-pick his terse language.

The bill would create a “government monopoly” over health care. It would outlaw all private health insurance, including Americans’ job-based coverage, and impose restrictions on private medical practice. No personal freedom, no personal choice.

Incredibly, more than half of all House Democrats are backing a similar bill (H.R. 676).

British citizens, the president also notes, are complaining about their own “single-payer” system (the British National Health Service), and says that it’s “going broke and not working.”

Perhaps the “going broke” description is not quite accurate. Britain’s health program is funded by a special 12 percent payroll tax on top of the nation’s progressive income tax. The system only “goes broke”—incurs a deficit or debt—when it spends more on medical services than the government budget allows, when demand outruns supply.

To prevent that, British officials have a simple remedy: Cut the supply of medical services, and deny care to patients. It’s government rationing; it’s been going on for years.

>>> Think Obamacare Is Bad? ‘Medicare for All’ Would Make Things Even Worse.

Is the British system working? That depends on how exactly one defines “working,” and comparisons can be complicated.

Clearly, compared to Britain, the United States has a much better record on some very serious items, such as breast and prostate and colorectal cancer survival, access to advanced medical technology and innovative drug therapies, and timely access to medical care.

The president concludes, “Dems want to greatly raise taxes for really bad and non-personal medical care. No Thanks!”

The president is right about that too. House and Senate Democrats are proposing to spend trillions to create their government monopoly. They have outlined, in exact legislative detail, their prescription for a top-heavy, highly centralized bureaucracy governing the financing and delivery of care. Independent analysts, prominently those of leading liberal think tanks, have shown that the taxes to sustain it would be breathtaking.

Scholars from the liberal Urban Institute estimate the total cost of the Sanders proposal at $32 trillion (underfinanced, of course) over the period 2017 to 2026.

Kenneth Thorpe, professor of economics at Emory University, estimates the cost of the Sanders bill at $26 trillion over the same period, projects a level of taxation at 20 percent of payroll to pay for the program, and says that over 70 percent of working families would pay more than they would under current law.

Leading liberals, now dominating the Democratic Party in both the House and Senate, are clear about their vision for America’s health care future.

Congressional Republicans, meanwhile, are still a “house divided.” They have yet to offer the American people a compelling vision based on personal choice of health care plans and providers, and have yet to coalesce around a competently crafted alternative.

In the Senate, the leading bipartisan health policy option appears to be a proposal that would primarily prop up Obamacare with a fresh transfusion of taxpayers’ dollars. This is a distraction that does nothing to address the real problems facing Americans who can’t find affordable private coverage that meets their needs.

Instead, Republicans should coalesce around a meaningful repeal plan this year. They can look to a plan that a group of conservatives has been developing for the past several months.

Republicans should guarantee Americans the right to choose the affordable care and coverage they want—at lower costs—by allowing their state legislators to fix the insurance markets that have been badly broken by Obamacare’s costly and inflexible regulations.

The president is right on target. Congressional Republicans, after eight years of promises, need to get their act together.