Trump Is Repealing Obama’s Harmful Water Rule. Why Efforts to Stop Him Are Misguided. 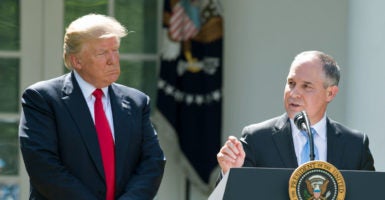 In 2015, the Obama administration finalized its infamous “Waters of the United States” (WOTUS) rule—also known as the Clean Water Rule—that sought to regulate almost every type of water imaginable under the Clean Water Act.

To its credit, the Trump administration is taking action to get rid of this rule by withdrawing it and then issuing a new definition of what waters are covered under the Clean Water Rule.

This process, though, will require significant litigation as lawsuits pile up in an effort to block the administration from protecting the environment in a manner that also respects property rights, federalism, and the rule of law.

In fact, the litigation is already getting underway.

The Environmental Protection Agency and the U.S. Army Corps of Engineers just finalized a rule that would delay the applicability date of the WOTUS rule by two years. This action helps give the agencies time to work through the regulatory process without rushing, and ensures that during this time, the WOTUS rule won’t go into effect.

Given uncertainty about litigation in multiple district courts over the 2015 rule, this action provides certainty and consistency to the regulated community and the public, and minimizes confusion as the agencies reconsider the definition of the ‘waters of the United States’ that should be covered under the Clean Water Act.

This commonsense delay, though, apparently didn’t please New York Attorney General Eric Schneiderman. He recently announced that he was going to sue the administration for this new rule to delay the Obama administration WOTUS rule.

He explained, “The Trump administration’s suspension of these vital protections [the WOTUS Rule] is reckless and illegal.”

He also stated, “Make no mistake: Abandoning the Clean Water Rule will mean pollution, flooding, and harm to fish and wildlife in New York and across the country—undermining decades of work to protect and enhance our water resources.”

It’s hard to see how a federal power grab that would regulate what most people would consider dry land is so critical to water, or why making it more difficult for farmers to engage in normal farming practices is going to be good for New York and the country.

Is the regulation of man-made ditches a must? Is it really a must for the agencies to regulate waters that can’t even be seen by the naked eye? Should the federal government act as a de facto local zoning board and intrude on traditional state and local power? Do we need to trample on property rights to protect the environment?

These are all effects of the WOTUS rule.

Maybe Schneiderman and others who want to block the administration from getting rid of one of the most egregious federal rules in recent memory think these are all good impacts. Most people, though, likely think otherwise.

There is an underlying assumption held by many of those who welcome such federal overreach: the federal government must regulate almost every water because there is no other alternative. They choose to ignore the fact that even the Clean Water Act expressly recognizes that states are supposed to play a leading role in addressing water pollution.

They see regulation as the only solution to any alleged water problems, not other government alternatives and especially not private means of protecting the environment. Respect for property rights, the rule of law, and federalism apparently are not important.

What should be important to them and certainly to most people is a clean environment. An overboard and vague rule though that seeks to regulate almost every water and ignores states is harmful to the environment, and this is precisely how to describe the WOTUS rule.

By developing a new rule that recognizes the need to work with states to address water issues, the EPA and Army Corps of Engineers will be helping the environment, not hurting it. A clear and objective rule, unlike the mess that is the WOTUS rule, helps both the EPA and Army Corps of Engineers with enforcement and makes consistent compliance by regulated entities far more likely.

The Trump administration appears to recognize the importance for such a new rule. It is unfortunate that some will use lawsuits to make it more difficult for them to achieve this critical objective.

Ultimately, Congress needs to clarify in the Clean Water Act exactly what waters are considered to be “waters of the United States,” because even if the Trump administration comes up with the greatest rule in history, a future administration could easily undo that excellent work.

In the interim, though, Congress needs to step in and eliminate unnecessary obstacles for the administration as it seeks to move forward with a new rule.