Why the Left Wants More and More Immigrants 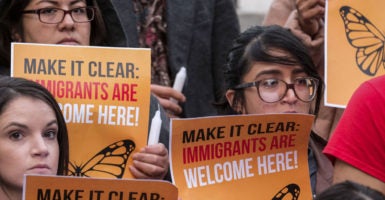 An estimated 70 to 80 percent of Latin American immigrants will vote Democrat when given citizenship. (Photo: Chine Nouvelle/Sipa/Newscom)

On one thing we can all agree: The left wants more and more immigrants—including immigrants who enter or are in the country illegally—to come to America and become American citizens.

The question is, why?

The first and most obvious reason is political. The Deferred Action for Childhood Arrivals program, chain migration, sanctuary cities, and citizenship for immigrants living in the country illegally will give the left political power.

An estimated 70 to 80 percent of Latin American immigrants will vote Democrat. So, with enough new voters from Latin America alone, the Democrats would essentially be assured the presidency and Congress for decades.

Conservatives and Republicans fool themselves when they argue that Latin Americans are “social conservatives” because they oppose abortion and support a strong nuclear family. Even to the extent that those statements are true—and regarding the second claim, it is worth noting that Latinos have the third-highest percentage of births to unwed women in America—those arguments are irrelevant.

Latin Americans are overwhelmingly on the political left, and they vote accordingly. Think about the Latin American Pope Francis’ beliefs about big government, small militaries, and the social welfare state, and his contempt for capitalism (“terrorism against all humanity”)—and you know how the vast majority of Latin Americans think.

What is likely to change Latino immigrants’ leftism? America’s public schools and universities? The Spanish-language media? The compelling outreach to them by the Republican Party?

Moreover, the Democrats don’t believe they have to compromise with a Republican president or a Republican Congress on immigration policy. They are confident they will gain control of the Senate and, quite possibly, the House this year—and they believe they will win the presidency in 2020. So, why compromise?

The second reason for the left’s support for virtually unlimited immigration is that one of the most enduring tenets of the left—from Karl Marx to the present-day Democratic Party and left-wing parties in Western Europe—is that the nation-state is an anachronism.

Marx’s “Communist Manifesto” ends with an appeal to class solidarity, not national solidarity: “Proletariat of the world unite; you have nothing to lose but your chains.”

Soviet leader Josef Stalin murdered about 20 million of his fellow Russians and deliberately starved 4 million Ukrainians—because of their class (the “kulaks”: peasants who owned land or even just some cows).

That’s why the left opposes a wall at America’s southern border. The wall signifies the affirmation of America as a distinct nation.

Those who support bestowing American citizenship on the children of illegal immigrants—the so-called “Dreamers,” based on a never-passed proposal in Congress called the DREAM Act—feel very good about themselves. They are the compassionate, the progressive, the enlightened.

This is why German Chancellor Angela Merkel brought a million refugees into Germany, a majority of them Middle East Muslims: She wanted to feel good about herself and Germany—especially in light of Germany’s evil history—”Look, world. We Germans really are good people.”

Why do Democrats support sanctuary cities, and even sanctuary states? Because, in addition to the first two reasons, it enables them to feel good about themselves. In their eyes, they are moral heroes protecting the stranger, the oppressed, the marginalized, the destitute.