It Could Be a Great Year for America’s Gun Owners. And for Gunmakers, Too. 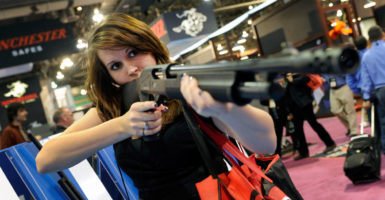 Lisa Deleon examines a shotgun at the 2013 SHOT Show in Las Vegas held by the National Shooting Sports Foundation. Organizers tout the event, the latest of which wrapped Friday, as the largest annual gathering of its kind. (Photo: David Becker/UPI/Newscom)

LAS VEGAS—One of the nation’s largest gatherings of gun owners, hunters, and sports shooters was bigger and better than ever, and again set the tone for the year in firearms—and for the people who love and work in the industry.

In previous years, the tone at the Shooting, Hunting, and Outdoor Trade Show, known as the SHOT Show, had been buoyant but concerned.

Buoyant because in the years after 2009, fears about what President Barack Obama would do drove gun sales to unprecedented heights. Concerned because—well, it’s never pleasant to know that the man in the White House doesn’t like you.

The mood was a bit different this time as I walked the aisles at the 40th annual SHOT Show, which closed Friday. You might say it was expectant, but nervous.

Expectant because no one at the event, organized by the National Shooting Sports Foundation, is in any doubt that President Donald Trump likes gun owners, and everyone hopes he’ll do right by them. Nervous because—well, so far, nothing much has happened.

True, good changes come slowly in this part of the world. During the past few months, Congress rewrote the entire tax code, but couldn’t find the time to pass legislation designed to protect the ears of gun owners.

As Jeff Folloder, executive director of the National Firearms Act Trade & Collectors Association, puts it of firearms reforms: “Watching grass grow is exciting. This is like watching dry paint fade.”

Yet the potential is there for 2018 to be an amazing year for American gun owners and gunmakers. At the top of a lot of wish lists is completing export control reform.

Begun by the Obama administration, export control reform has moved many nonmilitary items from the purview of the State Department and given them to the Commerce Department. This dramatically reduced State’s workload, and allowed it to be more careful about exports of genuinely military items.

As the National Shooting Sports Foundation has urged, regulating the export of firearms and ammunition was supposed to make the move to Commerce years ago. But it never happened, because the Obama administration didn’t want to look like it was doing the firearms industry a favor.

So today, firearms are trapped with crown jewels of the military such as tanks and fighter jets, and subject to the tighter scrutiny they receive. This wasn’t how it was supposed to work.

Then there’s the Hearing Protection Act, which would eliminate the transfer tax on firearms suppressors (which some inaccurately call “silencers”) and—in effect—remove the devices from the purview of the National Firearms Act, which is mostly for weapons such as machine guns and short-barreled shotguns.

Only the U.S. classes suppressors with machine guns. In most of Europe, suppressors are an off-the-shelf purchase.

As target shooting has become an urban and suburban pastime, suppressors don’t just protect the ears of those doing the shooting—they keep the noise down at gun ranges.

But like the broader Sportsmen’s Heritage and Recreational Enhancement Act of which it’s a part, the Hearing Protection Act has stalled in the House.

The House at least has passed the Concealed Carry Reciprocity Act, which makes a license to carry a concealed firearm in one state effective in all states that allow it. But the bill is stuck in the Senate.

Also pending is reform of the National Instant Criminal Background Check System. Federally licensed firearms dealers use the system to determine whether a prospective buyer is allowed by law to purchase a firearm.

For the past five years, the National Shooting Sports Foundation has urged that the background check system include more records, especially mental health adjudication.

This seems like a slam dunk. Even firearms-hating liberals should want to improve the National Instant Criminal Background Check System. The law-abiding retailers at the SHOT Show don’t want to sell to the wrong customer: Apart from all other considerations, it could be the end of their business.

And yet, we’re still waiting for the reform legislation—known as the Fix NICS Act—to get the push over the goal line that it deserves from both sides of the aisle in Congress.

Finally, there’s the Arms Trade Treaty, so beloved of the United Nations. In theory, the treaty requires nations to impose controls on international shipments of arms. In practice, treaty advocates focus their fire on the U.S. and Britain—and ignore Russia, China, Iran, and all the rest of the world’s bad actors.

Most of the good things SHOT attendees hope for this year—except export control reform—require c­ongressional action. But not getting rid of the Arms Trade Treaty, which Trump can “unsign” entirely on his own.

All of these things are on the agenda for 2018, though of course, the odds of them all happening in the same year are remote. But still, after eight years of Obama, it’s nice to have good things to look forward to.

Attendees of the SHOT Show just hope that Trump won’t make them wait too much longer.