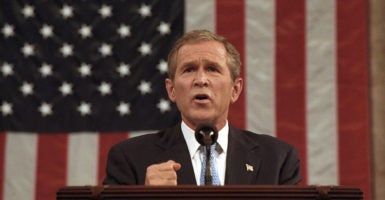 Former President George W. Bush has seen a dramatic turnaround in his approval rating since leaving office, with over a majority of the country now viewing him favorably.

Since departing the White House in 2009, the 43rd president’s approval rating has nearly doubled to 61 percent from 33 percent, according to a new CNN poll conducted by SSRS. Nearly a majority of all demographic groups, minus some such as nonwhites and individuals under 35, now view Bush favorably.

With over 6 in 10 Americans giving Bush the thumbs-up, he now sits just slightly lower in the rankings than former President Barack Obama, who boasts an approval rating of 66 percent. A 2016 survey showed that 47 percent of Americans approved of former President Bill Clinton.

Bush’s newly found approval by Americans mostly comes from changes of opinion from self-identified Democrats—they jumped to 54 percent approval from a low of 11 percent in February 2009.

Paradoxically, Republican disapproval has tripped to 21 percent from 7 percent since 2015, arguably in part because of Bush’s veiled criticism of President Donald Trump.

CNN conducted the poll through the research firm SSRS on Jan. 14-18 and used a sampling of 1,005 adults reached by landline or cellphone. The margin of error was plus or minus 3.7 percentage points.

This article has been corrected to reflect when President George W. Bush left office.