Trump: I’m Pleased ‘Democrats in Congress Have Come to Their Senses’ 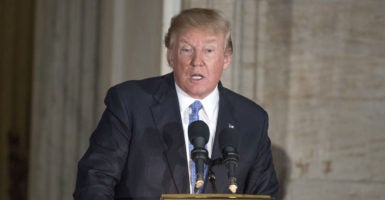 "We will make a long-term deal on immigration if, and only if, it is good for our country,” President Donald Trump says. (Photo: Ron Sachs/SIPA/Newscom)

President Donald Trump applauded Senate Democrats Monday for backing a bill that will keep the government funded through Feb. 8, which ends the three-day government shutdown over legal protections for 800,000 Deferred Action for Childhood Arrivals recipients and their families.

“I am pleased that Democrats in Congress have come to their senses and are now willing to fund our great military, border patrol, first responders, and insurance for vulnerable children. As I have always said, once the Government is funded, my Administration will work toward solving the problem of very unfair illegal immigration. We will make a long-term deal on immigration if, and only if, it is good for our country,” Trump said in a statement Monday afternoon.

“Great to see how hard Republicans are fighting for our Military and Safety at the Border. The Dems just want illegal immigrants to pour into our nation unchecked. If stalemate continues, Republicans should go to 51% (Nuclear Option) and vote on real, long term budget, no C.R.’s,” Trump tweeted Sunday morning.

“Democrats are holding our Military hostage over their desire to have unchecked illegal immigration. Can’t let that happen,” Trump tweeted Saturday.

The majority of Senate Democrats agreed Monday afternoon to a bill that keeps the government funded through Feb. 8 and provides six years of funding for the Children’s Health Insurance Program. Some 81 senators voted in favor of the bill, with 18 Senate Democrats and two Republicans voting against the bill.

Senate Democrats shut down the government over the weekend in an effort to get Republican leadership to cave and include legal protections for “Dreamers” and members of their families in the continuing resolution.

The House and Senate must come to an agreement on the bill and then the White House Office of Management and Budget has to review the final proposal before it can make its way to Trump’s desk for approval.

Content created by The Daily Caller News Foundation is available without charge to any eligible news publisher that can provide a large audience. For licensing opportunities for this original content, email [email protected]ndation.org.