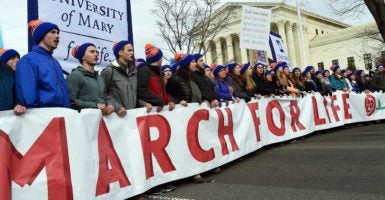 March for Life protesters gather in the District Columbia. The rallies have occured annually since 1974. (Photo: Leslie E. Kossoff/Polaris/Newscom)

The most successful social movements in American history have almost always channeled the philosophy of the founding generation, and in most cases, religion.

Religious conviction along with the principles of the Declaration of Independence, which defines rights as both God-given and equally applicable to everyone, drove both the anti-slavery and civil rights movements.

In many ways, the modern pro-life movement has followed in this tradition in defense of the individual right to life itself.

Public opinion on the issue of abortion has certainly shifted over the last half century, with an increasing number of Americans identifying as pro-life, and an even higher number of people calling themselves pro-choice while actually holding more pro-life views.

Undoubtedly, the work of a few dedicated organizations has contributed to this shift.

This year, the nation’s capital will host the 45th annual March for Life. The march initially began as a protest of the Roe v. Wade Supreme Court decision, which defined abortion as essentially a constitutional right under the due process clause of the 14th Amendment.

Many Americans opposed this decision on both moral and legal grounds, and used events like the March for Life as a sounding board for their views. The rally has continued and grown over the years, attracting people from all over the nation who believe that abortion is fundamentally wrong.

While the pro-life movement has sharpened in focus and increased its scope over the last 50 years, the pro-choice movement has drifted further away from its more limited public goal, once famously articulated by President Bill Clinton: that abortion should be “safe, legal, and rare.”

At one time, this argument held more sway. Its proponents said that abortion was simply going to happen regardless of legal restrictions, and that it should therefore be in a “safe” environment rather than in a back alley.

Hillary Clinton tried to revive this rhetoric in 2008, emphasizing that abortions should indeed be “rare,” but she then dropped that language in the 2016 election. She even advocated scrapping the Hyde Amendment, which prevents federal dollars from directly funding abortions.

This must be pointed out, not to demonstrate the shiftiness of the Clintons, but to show how the pro-choice movement has become more strident and insistent on abortion being more than just a necessary evil, but a positive good for individuals and society.

As scholar David Grimes said in an interview with the Los Angeles Times, “Abortion is good for you, your family, and society. … It’s a win-win-win.”

While pro-choice advocates would undoubtedly balk at this comparison, many have drawn similarities between the debate over abortion and the one over slavery in the 19th century.

The original terms of the debate, in both cases, mostly revolved around the utility and practicality of an institution’s existence.

Most of the Founding Fathers recognized slavery as an institution that was out of step with the philosophy of the Declaration of Independence, and sought its eventual extinction.

However, by 1860, a sizeable clique of Americans believed that slavery was actually a moral positive and needed to be preserved forever. This sharp moral division proved intractable and led to war.

In a provocative piece in the Public Discourse, Regent University professor Miles Smith IV wrote that the arguments for abortion on demand, couched in the language of individual autonomy, run parallel to the arguments of the more radical Southern slavery advocates.

Defenders of slavery saw government intrusion on their “property” as a violation of their sacred rights. As a result, they sought to make sure that slavery remained accepted and protected to a maximum extent under all conditions.

“In the same way,” wrote Smith, “modern abortion advocates have viewed any obstacle to abortion-on-demand—including waiting periods and parental consent for minors—as an entirely unwarranted invasion of women’s totalitarian authority over their unborn children.”

The terms of the abortion debate have shifted in the last 20 years from “safe, legal, and rare,” to no restrictions under any circumstances.

This shift is evident in the left’s opposition to any reasonable limits on abortion practices. For instance, the pain-capable abortion bill, which would prevent abortions after 20 weeks.

The 20-week limit was set because studies have shown this is around the time babies can feel pain. Even most European countries, which are generally more left-wing than the United States, place restrictions on abortions early in the second trimester.

Yet, many pro-choice proponents attacked this legislation as dangerous.

Abortion provider Planned Parenthood said of this measure on its website, “20-week bans are part of an agenda to ban all abortion. Anti-abortion politicians in Congress and in state legislatures are pushing their agenda, bit by bit, to ultimately outlaw abortion completely.”

There has also been hostility toward the proposed Born-Alive Abortion Survivors Protection Act, which would extend legal protections to babies born after a botched abortion.

It must be noted that killing a baby after birth stretches the limits of what could even be described as an abortion. Yet some, like former Sen. Barbara Boxer, D-Calif., have been willing to at least theoretically cross that line.

Now, Democrats’ refusal to get behind the born-alive bill speaks even louder. The distinction between the pro-life and pro-choice camps is becoming more clear than ever.

Which raises the powerful question faced by many past generations of Americans: Do we really believe that all men are created equal? Or shall we cast that belief aside when it’s convenient?

Americans are quick to excoriate generations of the past for failing to uphold their convictions and for falling short of our founding ideals. It is worth noting that we, too, may be judged and found sorely wanting.