More Than 3 in 4 Americans Support Limits on Abortion, Poll Finds 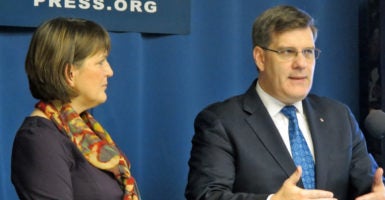 About 76 percent of Americans support stricter laws on abortion, according to a new Marist Poll, a finding that is part of a consistent trend in data the company has collected in the past decade.

While 51 percent of respondents identified as pro-choice, 60 percent of them said they support limitations on abortions, such as backing a ban on the procedures after 20 weeks of pregnancy and opposing the use of tax dollars to pay for them.

“There is a slight majority in favor of pro-choice,” said Andrew Walther, vice president of the Knights of Columbus, the Catholic service organization that commissioned the annual poll.

But labels of pro-life or pro-choice “don’t quite tell the whole story,” Walther said Wednesday in discussing the results at the National Press Club.

“Interestingly, this also cuts across political lines in ways that might be a little bit surprising,” he said.

About 61 percent of Democrats, 92 percent of Republicans, and 78 percent of independents said they want significant restrictions on abortion, according to the poll.

Marist Poll and the Knights of Columbus released the results two days before the annual March for Life in Washington.

In conducting the survey, the pollster first asked a binary question, such as whether or not the respondent was pro-life or pro-choice, and then a more detailed and nuanced followup, Barbara Carvalho, director of the Marist Poll, told reporters and others in attendance.

Marist Poll added a new question in this year’s survey asking, “When does life begin?” Answers ranged from “at conception” to “when a baby is born.”

Walther said there is a “fairly interesting divide” between pro-lifers’ and pro-choicers’ views on why people believe life begins at conception.

About 42 percent said abortion is a “major factor” in how they vote in elections, and at least 70 percent said it is either a major or minor factor.

Asked how President Donald Trump has done with the pro-life movement, Walther answered, “When you look at the polling … some of the actions he’s taken track very very well with where Americans are.”

The poll surveyed 2,617 adults 18 and older who live in the continental U.S. during December and January, and has a margin of error of plus or minus 3 percentage points.