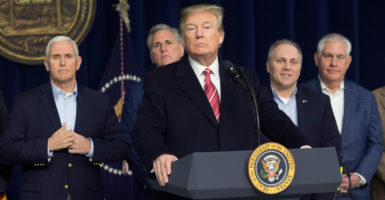 A federal judge in California ordered the Trump administration to maintain the Deferred Action for Childhood Arrivals (DACA) program late Tuesday, an Obama-era amnesty policy that extends legal status to 800,000 illegal aliens who arrived in the U.S. as children.

The ruling could ensures DACA’s security as President Donald Trump attempts to reach an immigration deal with Democratic lawmakers. The program was scheduled to phase out in March.

“Tonight’s order doesn’t change the Department of Justice’s position on the facts: DACA was implemented unilaterally after Congress declined to extend these benefits to this same group of illegal aliens,” said Justice Department spokesman Devin O’Malley. “As such, it was an unlawful circumvention of Congress, and was susceptible to the same legal challenges that effectively ended DACA.”

“The Justice Department will continue to vigorously defend this position, and looks forward to vindicating its position in further litigation,” he added.

The administration justified DACA’s termination on separation of powers grounds, arguing only Congress could authorize such a program.

Alsup strongly rejected this view, pointing to a 2014 Justice Department memo purporting to show that DACA’s features are rooted in Supreme Court case law or related powers granted by Congress.

Since Alsup concluded the program’s rescission was based on a flawed legal premise, he said the action was “arbitrary, capricious, an abuse of discretion, [and] otherwise not in accordance with law.”

Alsup further noted that Trump himself has determined DACA serves the public interest, citing two September 2017 tweets in which the president expressed support for so-called “Dreamers.”

Congress now has 6 months to legalize DACA (something the Obama Administration was unable to do). If they can't, I will revisit this issue!

“We seem to be in the unusual position wherein the ultimate authority over the agency, the chief executive, publicly favors the very program the agency has ended,” the judge wrote.

The order does not require the administration to process new DACA applications, and allows law enforcement to remove any DACA recipient believed to pose a threat to national security or public safety.

The Trump administration can ask the 9th U.S. Circuit Court of Appeals to review Alsup’s decision.

The Supreme Court recently lifted a sweeping discovery order Alsup issued in the DACA litigation. The judge ordered the Trump administration to release all internal documents relating to the program’s cancellation, despite the government’s insistence that many such records were privileged. The justices concluded that Alsup’s order was overly broad, and ordered him to reconsider the administration’s arguments.

The University of California system brought the suit challenging DACA’s termination. The system is led by Janet Napolitano, the former secretary of Homeland Security who presided over DACA’s original promulgation during the Obama administration.

The ruling can be viewed here.