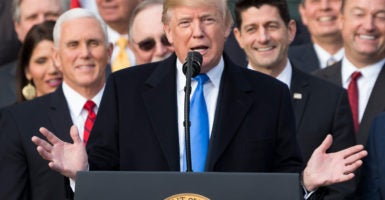 Taxpayers could see the benefits from Republicans’ tax reform as early as February, one tax expert says.

“Certainly early next year, February probably, businesses will start deducting less from employees’ paychecks, and so there you will see a benefit, you will have higher take-home income when your employer is sending less of your money to Washington,” Adam Michel, policy analyst for economic studies at The Heritage Foundation, told The Daily Signal in a phone interview.

In a final 224-201 Wednesday vote, the House sent the bill to President Donald Trump’s desk for his signature.

Historic tax cuts are on their way to the President's desk.

Trump has made passing tax reform a major goal of his first year in office.

We are delivering HISTORIC TAX RELIEF for the American people!#TaxCutsandJobsAct pic.twitter.com/lLgATrCh5o

Michel said he expects businesses to see the benefits from tax reform in the next year.

“Businesses will start adding more jobs and investing more in the United States immediately, and those effects, we will probably be able to see them in the data within a year, and they’ll probably be fully materialized over the course of the following several years, but the indicators will start trending up within 12 months or so, I would presume,” Michel said.

But if you’re ready for a simpler tax code, you’ll have to wait for filing in 2019.

“When they file their taxes this spring, they’ll actually be filing last year’s tax bill, so nothing will change there,” Michel said. “Then, in 2019 when people are filing for 2018, which is this first year when tax reform will be going in, then that’s when they’ll actually see the simplification of just being able to take the larger standard deduction and those types of reforms.”

The bill repeals Obamacare’s individual mandate, and also increases the current $1,000 child tax credit to $2,000 and gives a $500 credit for non-minor child dependents.

Support for the new Republican tax law has increasingly grown in recent days, with the office of Senate Majority Leader Mitch McConnell, R-Ky., sending out an updated list Tuesday night of 255 groups who have expressed support for Republicans’ tax reform.