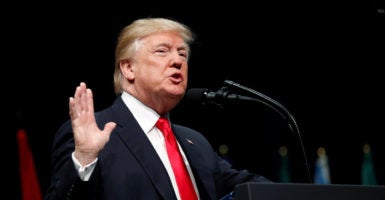 The deregulatory commitments are intended to comply with the president’s Executive Order 13771, which directs federal agencies to identify for repeal at least two existing regulations for every new regulation they promulgate. (Photo: Jonathan Ernst/Reuters/Newscom)

The Trump administration on Thursday released an ambitious regulatory agenda that commits federal agencies to more than 400 deregulatory actions in fiscal 2018, and to cutting future regulatory costs to the private sector by $9.8 billion.

The need for reform has never been greater.

The deregulatory commitments are intended to comply with the president’s Executive Order 13771, which directs federal agencies to identify for repeal at least two existing regulations for every new regulation they promulgate. The order also calls for a budgeting process to reduce net regulatory costs each year.

White House officials have now upped the goal to eliminating three regulations for each new one issued.

According to the administration, its new Unified Agenda of Regulatory and Deregulatory Actions—typically published twice a year—reflects the withdrawal of 635 previously listed regulations, the delay of 244 regulatory actions, and the shelving of 700 rule-makings.

In a press conference preceding release of the Unified Agenda, President Donald Trump claimed that his administration has eliminated 22 regulations for each one it has issued. That tally includes guidance documents, paperwork reductions, and regulations repealed by Congress under the Congressional Review Act.

Considerable hurdles confound the administration’s deregulatory goals. Repealing a rule entails a complex and protracted administrative process, often involving the courts. It also requires following the rule-making procedures under the Administrative Procedures Act, including providing justification for the action and subjecting it to public notice and comment.

Indeed, a regulatory repeal can take years to accomplish.

Reform is also difficult to accomplish because regulation is far more than policy. It is also a political spoils system by which various special interests impose their will on the public. Thus, powerful forces favor the status quo.

Beyond the numbers, however, there is no question that there has been a fundamental—and welcome—shift in regulatory policy under Trump.

Neomi Rao, the administrator of the Office of Information and Regulatory Affairs, characterized current agency rule-making as “cautious,” noting that the imposition of regulations must be authorized by statute, necessary to correct a substantial market failure, and of net benefit to the public.

That was definitely not the case during the Obama administration, which frequently breached statutory and constitutional boundaries, and increased regulatory burdens by more than $122 billion annually.

Past Republican administrations have hardly been paragons of regulatory restraint, either.

There is urgent need for reform. Regulation acts as a stealth tax on the American people and the U.S. economy and exacts an incalculable toll on individual liberty.

For the ninth time in the past 10 years, America lost ground compared with other countries. And in the “Business Freedom” component of the index, which measures the regulatory burden, the U.S. registered its worst score ever.

As the latest Unified Agenda illustrates, the Trump administration has launched a multifaceted reform agenda that has slowed rule-making considerably and forced agencies to offset the regulatory costs imposed on the public.

The extent to which the administration ultimately succeeds in reining in decades of excess remains to be seen. But lasting reform requires action by Congress to constrain the bureaucratic impulse to wield ever greater power and to impose accountability on the elected officials who routinely evade it.